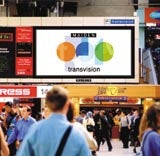 Outdoor media is on the verge of a digital revolution if the industry’s evangelists are to be believed. Screens are to be installed alongside escalators on London Underground, which will be able to show animated posters whose content alters with the changing time of day.

Viacom Outdoor is to test- market this new digital advertising platform from May, after installing liquid crystal display screens at Tottenham Court Road Tube station. The trial comes at a crucial time for Viacom as its hold on the ten-year Transport for London contract is under review – a decision is due to be made by the end of 2005.

The contract comprises selling advertising on the London Underground, the Docklands Light Railway and Victoria Coach Station. Viacom is pitching against nine others, including JC Decaux and Clear Channel.

This isn’t the first time that Viacom has experimented with digital technology on London Underground. In 2002 it was forced to abandon a pilot for a cross-track projection (XTP) system that placed moving images and ads from brands such as Virgin Mobile onto the walls of station tunnels.

But Viacom joint managing director Andrew Oldham explains the trial was axed after its technology partner on the project, DHJ Media, went into liquidation and a suitable replacement could not be found. XTP is already being used in Hong Kong and other parts of the world and there is nothing to suggest that it won’t, at some time, return to the UK.

Viacom’s London Underground digital advertising system links 66 panels, operated from a central control room at Viacom’s Camden headquarters. Viacom will sell either five- or ten-second spots that will run on a continuous 60-second loop. Seven major advertisers are thought to have signed up for the trial, including Transport for London. It is envisaged that the ads will eventually be able to change in such a way that they will enable advertisers to target travellers with products depending on the time of day.

The Outdoor Advertising Association claims that digital outdoor is the fastest-growing media channel in the UK, with revenue up 88 per cent on the previous year to almost £18m in 2004. Its growth rate outstrips that of outdoor as a whole, which accounted for 7.1 per cent of display advertising revenue in 1999 growing to 9.3 per cent in 2004.

But digital media is still relatively new to the market, representing just over two per cent of total outdoor revenue. It has a long way to go before it comes close to mirroring scenes from Steven Spielberg’s Minority Report, where sites embedded with chips scan a pedestrian’s eyes, and respond by broadcasting moving ads and words aimed at the individual.

Yet the digital media in use today has the potential to be employed in a targeted fashion. Posters are using Bluetooth technology and Hypertag chips to send passing consumers with compatible mobile handsets video clips of television ads, offers or further information. Maiden is currently test-marketing Bluetooth technology in the ads shown on its large Transvision screens at travel points such as Victoria Station.

Maiden Outdoor managing director David Pugh says: “People can take the ad away with them; jump on the train and look at it.” The widespread take-up of mobile phones has helped drive the growth of outdoor, says Pugh. It has also given advertisers a means to measure direct response.

Pugh does not believe this new way of communicating with consumers is invasive. “It’s the opposite of Minority Report. We’re not in the business of forcing advertising on people.” But others see this “bluecasting” as the start of mass-scale delivery of targeted messages in the outdoor arena.

Paul Martin, account director at outdoor planning and buying specialist Concord, says: “It’s starting already with individual messages being sent to people as they walk past an ad site.”

But he warns: “I hope it stays as more of an opt-in scheme, rather than blanket bombardment. There’s the chance it might go down the road of viral e-mails.”

Consumers will soon find it difficult to escape the effect of digital media as they cruise down the shopping aisle of their local supermarket. Tesco has led the way among retailers by installing 5,000 screens in 100 of its larger stores.

David McEvoy marketing director of JC Decaux, which sells space on Tesco TV, says: “The screens offer advertisers a captive audience, just like the railway station screens, and there is time for the advertising messages to work. So, I think it will be successful.”

He says Tesco conducted large-scale customer research on desirability before installing the network, which not only delivers ads from suppliers, but also information on offers and products to customers.

But talking about digital media in general, McEvoy adds: “It’s sometimes a case of product push rather than consumer pull.

“In digital media, people get carried away with the technology – just because you can install a screen somewhere, doesn’t mean you should. That’s the hardest thing, not to get carried away.”

Digital networks are not just limited to retail chains. There are 400 London buses with screens carrying moving posters. And Adwalker offers advertisers, such as holiday companies and hotel chains, space on screens strapped to people, who then wander around bars, public places and travel points with the aim of interacting with potential customers.

“You have to be relevant to people’s environment and try to get into their mindset at that time.”

That was where Forecourt Television failed, says Pugh: “People just want to quickly fill up and get back in the warm. An expensive television system was inappropriate. Yet low-tech stickers on petrol pumps advertising products are effective.”

The right environment, targeting consumers in an appropriate manner and high dwell time are all essential to the success of digital media. But the cost of installing screens and suitable technology is a heavy overhead for such an emerging media.

There is, however, a major advantage over traditional outdoor sites – maintenance costs are lower because content can be changed remotely. On the other hand, digital screens tend to have a lifespan of about five years, whereas a poster site can last as long as 15 years before needing to be replaced, according to Adshel managing director Julie France. She adds: “The jury is still out in terms of whether anyone’s making any money out of digital media.”

Nevertheless the industry is expecting technology to change the face of outdoor.

Bookmaker Paddy Power has created a “novelties trader” post as the popularity of unusual wagers takes off, appointing Sharon McHugh to the position. The company has a reputation for offering wagers on unusual events, and has this week been inundated by bets on the identity of the new Pope. Over half of Paddy Power’s betting […]

M&C Saatchi has created a television ad for Foster’s Super Chilled, which will hit screens North of the border next week. The Scottish campaign, planned by Starcom MediaVest, is designed to increase Foster’s market share in a region where it is already making inroads against other well-established lager brands including Miller and Tennent’s. The M&C […]