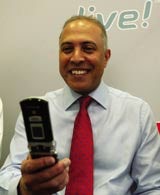 Vodafone chief marketing officer Peter Bamford appears to have paid the price for being a member of the mobile phone giant’s “old guard” after being ousted by beleaguered chief executive Arun Sarin.

The boardroom split that looks to have cost Bamford his job claimed another high-profile casualty at the weekend when former chief executive Sir Christopher Gent resigned his honorary life presidency and walked away from the company he helped build. Bamford, who leaves on April 1, is one of the last members of Gent’s “Newbury Gang”, along with chairman Lord MacLaurin and deputy chief executive Sir Julian Horn-Smith, both of whom will retire in July.

However, some believe Bamford was shown the door because he simply was not right for the job. Bamford used to work for Lord MacLaurin at Tesco and Gartner global research director Martin Gutberlet says: “He is not a young, trendy mobile phone type of guy, and that was part of his downfall.” But, while some think Sarin’s decision to remove Bamford has strengthened his position, Gutberlet adds: “It doesn’t suddenly change everything. Sarin is still not good at talking to the financial community.”

Ovum principal analyst Robin Hearn agrees that Bamford was never overly convincing in the role of chief marketing officer. He says: “Bamford never struck me as being a traditional marketing guy. He’s quite gentle and I think a head of marketing has got to have a big personality. But he clearly hasn’t done anything desperately wrong either.”

As Marketing Week went to press, Bamford’s marketing duties were being handled by global consumer marketing director Frank Rovekamp but former Barclays marketing chief Simon Gulliford is believed to be in the running to take up the role on a full-time basis.

Hearn thinks Sarin has a difficult job on his hands because of the culture that existed at the group under Gent. “Sarin was brought in to do a job that’s fundamentally different from the personality of the people who built the company,” he adds. Sarin looks to have bought himself some time by announcing the proposed sale of Vodafone’s underperforming Japanese arm, a move that should appease shareholders in the short term. That could be followed by the disposal of the stake in US joint venture Verizon Wireless.

But the whispering campaign against Sarin refuses to go away. It was reported at the weekend that Lord MacLaurin, who brought in Sarin to replace Gent in 2003, tried to oust his chief executive at a company board meeting in Madrid recently. A City source tells Marketing Week that formal interviews have been conducted to find a replacement for Sarin, with former Italian executive Vittorio Colao among the candidates.

But by removing Bamford, Sarin has made it clear he is going to fight for his job. Vodafone issued a statement on behalf of Lord MacLaurin, who has just returned from a business trip in South Africa, at the weekend. It says: “I have read the recent press comment about Vodafone with great concern. I want to make it clear that I and the board are totally supportive of our chief executive Arun Sarin as he takes the company forward. Any other suggestion is completely untrue.”

Sarin is not yet out of the woods, but if he can survive until July he will get a fresh start under new chairman Sir John Bond, who is joining Vodafone from HSBC. However, Sarin must prove that he is the heavyweight leader the company needs if he is to remain in place.