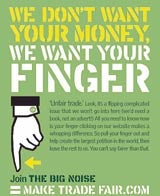 Oxfam has appointed Edward Fox as its director of fundraising and supporter marketing.

Fox joins in September from international Christian charity World Vision, where he was marketing director. World Vision is looking for a replacement for him.

At Oxfam, he fills a position that has been vacant since February, when Simon Collins left to become chief executive of charity Resource Alliance.

While at World Vision, Fox oversaw the creation of an Alternative Gift Catalogue for the Christian relief and development agency. The catalogue allows donations to be packaged as gifts of goats, chickens or clean water to the needy in the developing world.

Fox joined World Vision in July 1999 from Anglia Water, where he was head of marketing.

In May, Oxfam launched a Fairtrade campaign, created by HHCL/Red Cell, as part of an initiative to encourage activism rather than solicit donations. The campaign was timed to coincide with the Glastonbury Festival and will also form part of Oxfam’s lobbying of the World Trade Organisation meeting in Mexico in September.

Oxfam is focusing on the coffee trade and encouraging people to write letters of protest to Nestlé, Kraft, Procter & Gamble and Sara Lee about the low prices they pay to coffee farmers.

Oxfam is one of the UK’s largest charities, raising &£189m a year. World Vision’s annual income in the UK is &£33m.