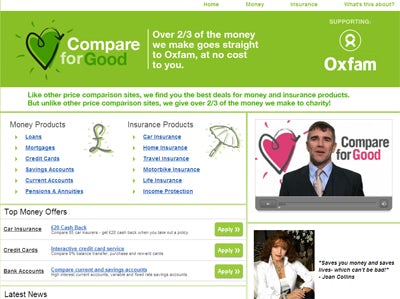 The co-branded site, has been developed by entrepreneur Ivan Massow to help consumers save money and it will be a long-term fundraising channel for Oxfam.

The site was launched by Oxfam supporter and actress Joan Collins and will be supported with a digital marketing campaign including Twitter activity that has been endorsed by celebrities including Kylie Minogue.

A direct email campaign will target existing Oxfam supporters to raise the profile of the site.

Consumers can find competitive deals on financial products including insurance, loans and credit cards. tilities and travel options will also be available aiming to equal the deals found on rival sites such as Comparethemarket.com and Moneysupermarket.com.

The commission earnt through the site goes to the charity instead of the service provider, at no extra cost to the consumer.

Massow says the not-for-profit site is a “state of the art comparison site” and consumers will not be compromising on value because they are also donating to charity.

It is powered by Beatthatquote.com and aims to match the offers generated by rivals.

Compareforgood.com says two thirds of its revenue will go to Oxfam with the remainder going to pay the running costs of the site.

The comparison site market is worth around £1bn a year with six million users each month.

Massow adds that Compareforgood.com partnered with Oxfam because it is a “very innovative charity” and “wasn’t afraid to be different”.

He says there is a possibility of launching similar fundraising models for other charities in the future.