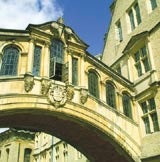 Oxford University is to launch its first national advertising campaign to promote a new bursary scheme for less affluent students.

The campaign breaks this month and features the strapline “It’s not what’s in your pocket, it’s what’s in your head that counts.” The marketing activity, targeting 14- to 17-year-olds and their families, includes press and outdoor advertising, online advertising, ambient executions and a direct marketing campaign. It will run for two months, with a second burst planned for September, lasting one month.

Integrated agency 23red has been appointed to handle the university’s advertising account and its first project has been to develop a press and outdoor campaign to raise awareness of the “opportunity bursaries”, which will be worth up to &£13,000 when they are launched next year.

Both bursary schemes aim to help students with their living costs when tuition fees are raised to &£3,000 a year from next autumn.

An Oxford University spokeswoman says: “We hope this campaign will encourage even more potential applicants in our target regions to find out more about what the bursaries can offer them.”

BT Retail will begin internal trials of a mega-fast 8Mbps broadband in April, with the aim of rolling it out to consumer and business customers by the end of the year. A larger trial is planned for the summer, if the initial trials are successful. BT says it is responding to user demands and is […]

Alan Mitchell’s article “The immeasurable damage of our measuring systems” (MW March 3) is one of the best articles I’ve read in Marketing Week. As a fully fledged, qualified and experienced marketing manager with a proven track record in delivering growth and strategic insight, I am now considering a career change because, quite frankly, I’m […]