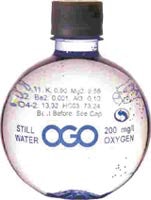 O-Company, the Belgian outfit that sells over-the-counter oxygen called OGO, is extending its range of products by launching an oxygenated water.

The company, which launched the OGO oxygen cylinders in April last year, will be introducing the 33cl globes of water across Europe in July via up-market bars and restaurants, with a plan to roll out to retail depending on response rates. The product will be priced at about &£1 in the UK.

The company, founded in 1999 by entrepreneur Bart Meijer, claims oxygen-enriched products have health benefits for the consumer and are an alternative to caffeine-based pick-me-ups. OGO water is oxygen-enriched by a non-chemical process to 300mg of oxygen a litre. Half-litre and one-litre globe packaging is also planned.

Spirit is responsible for developing the O-Company brand in the UK (MW March 1, 2001) and will handle marketing for OGO water. Initially it will be carrying out direct marketing and sampling activity.

OGO oxygen canisters are stocked in some branches of Boots, the Fresh & Wild Health food chain, and have just been listed at Harrod’s.

The National Cycle Network has appointed ex-Allied Domecq marketer Shirley Acreman to the new post of director of marketing and information. She worked at Allied Domecq for more than five years in various marketing positions. Most recently she was the joint marketing director of the Ballantine’s whisky range with Juan Pablo Colas. Allied Domecq says […]

Golden Wonder’s Nik Naks brand is to sponsor the UK premiere of The Osbournes on MTV. The ten-part fly-on-the-wall documentary, which follows the bizarre antics of UK rock star Ozzy Osbourne and his family at their US home, was due to air on Sunday at 9pm. But it is understood that the launch date for […]

Further to the article “DTLR snubs COI and picks own agencies” (MW May 2), I would like to point out that COI is fully supportive of the agencies with which it works. COI did not at any time suggest to agencies that “if they pitched for the DTLR business, they could be black-listed for future […]