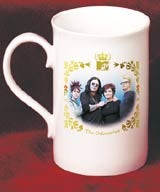 OK, so we’ve got the World Cup, we’ve had the Golden Jubilee, but there is another special family, all but overshadowed by football and royal fever – the Osbournes.

No, I don’t mean your old headmaster’s family – I mean Ozzy, the old-time rock legend, not-so-reformed alcoholic and lead singer of Black Sabbath. A documentary series, following the star and his family in “everyday” life, airs for the first time on UK television this month. To celebrate the launch of what is reputedly George Dubya Bush’s favourite TV show on MTV, Point Blank Design has commissioned a commemorative bone china mug.

Although a limited edition of only 1,000, the Diary doesn’t really think it will find a special place next to Golden Jubilee memorabilia in many people’s homes – it certainly holds a fair slug of Jack Daniel’s though.