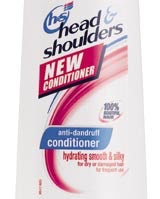 Procter &amp; Gamble is ploughing &£15m into relaunching Head &amp; Shoulders shampoo as part of a major marketing push behind the brand. It has also signed up Sex And The City actress Kristin Davis as its global brand ambassador.

The consumer goods giant has upgraded the formula, redesigned the packaging and is launching a range of separate Head &amp; Shoulders conditioners. The new products will be launched onto supermarket shelves in March.

Davis, who played Charlotte York in the hit US drama, is expected to star in a major television and press campaign to support the relaunch. It will be developed by P&amp;G advertising agency Saatchi &amp; Saatchi. Head &amp; Shoulders is now seen as a cosmetic brand rather than just a functional one, according to P&amp;G commercial director for haircare Tom Moody.

“Our research shows that women like to use the same brand of shampoo and conditioner, and if you use the wrong conditioner with Head &amp; Shoulders, you run the risk of washing away the active anti-dandruff ingredients in the shampoo,” he says.

P&amp;G dominates the UK’s &£315m UK shampoo market and Head &amp; Shoulders is the UK’s top-selling shampoo with a 12 per cent market share, according to Mintel. Its other brands, including Pantene, Wash &amp; Go and Herbal Essences, give it 38 per cent of the market.

But in the UK’s &£192m conditioners market, P&amp;G brands currently account for just 23 per cent, compared with Alberto Culver’s 17 per cent and Unilever’s 15 per cent.