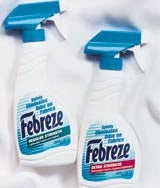 The range will be extended with two new variants – Meadow Rain and Summer Splash – and packaging will be redesigned using translucent plastic packaging and an updated on-pack appearance.

TV advertising for Febreze will be handled by P&G roster agency Grey. Industry sources say the ads are expected to focus on the natural advantages of the new variants. One insider says: “P&G is again following the trend for natural-based products.”

The company has already replaced its Fairy antibacterial dishwashing range with a three-product Naturals line that includes eucalyptus, lime and lemongrass, and tea tree, orange and lemon variants.

The source adds that P&G is trying to update the Febreze brand’s image, which has remained largely as it was when it launched nationally in February 1999. Febreze is sprayed onto home furnishings, such as curtains, and dissolves odours as it dries.

The media business will be shared between MediaCom, Zenith Optimedia and Starcom MediaVest. Incoming marketing director Giuseppe Casareto, who was appointed in October (MW October 23), will oversee the launch.