While the UK as a whole is feeling pretty damp at the moment, owing to an unseasonal spate of heavy storms and squalls, travel agents and tour operators must be feeling particularly under the weather.

Last year’s unexpected scorching British summer encouraged people to stay in the UK, so with the contrasting wash-out this year, one might expect the mass-market travel industry to be enjoying a bumper season.

But so far, the signs are that the high street travel agents, many of them owned by vertically integrated tour operators, are not seeing any major resurgence in sales. The latest cumulative figures for high street holiday sales (to the end of July) show a drop of seven per cent on last year, to 10.5 million (AC Nielsen). Disturbingly, the figure is lower than the 10.8 million recorded in the industry’s traumatic year of 2002, the summer season that followed the September 11 terrorism attacks in the US. The fall in demand has put some independent package operators under pressure and only last week short-break company Travelscene was declared insolvent.

Even some of the online travel companies catering for the needs of the ever-increasing band of independent travellers are having a tough time, with both Lastminute.com and Ebookers issuing profits warnings during the past year.

Other ports of call

The decline of the traditional two-week “sun, sea and sand” mass-market holiday and the subsequent impact on high street travel agents has been well documented. However, the stampede away from the travel agents seems to have been more accentuated this year. One analyst says: “The market was very soft in May, June and July and has been one of the worst times people can remember.”

German-owned TUI UK’s Thomson Holidays brand is the biggest holiday supplier by volume and value on the high street. The company also operates the Lunn Poly retail chain. TUI UK marketing director Hugh Edwards says: “We think we will be four per cent down, year on year, through the high street.”

Stuart Jackson, commercial director of independent tour operator Cosmos, owned by Globus Travel Group, says that its business with travel agents is three per cent down, but that overall sales are “on a par with last year”.

However, it is not bad news everywhere: Mike Greenacre, chief operating officer of the Co-operative Travel Trading Group (CTTG), the buying and marketing body for the Co-op’s five travel chains, says sales at United Co-ops, a 100-strong chain in the North, are up seven per cent on last year.

The travel companies cite various factors that have caused the fall-off in mass-market sales, including the impact of the Euro 2004 football tournament that kept people at home in June and the increasing trend toward late booking, as consumers look for more flexibility and shorter breaks. Nigel Ragg, head of marketing at specialist operator Mark Warner, says: “People are booking much later in the season, particularly where peak weeks are concerned. They are also not going for two-week holidays any more – they want to spread their holidays out across the season.”

Alongside TUI, the major tour operators are First Choice, MyTravel and Thomas Cook. Although between them the “big four” own approximately half of the high street travel outlets, they all say that the drop in high street sales is being balanced by a migration to their direct sales operations, in the form of call centres, television stations and websites.

However, they know they are battling against a customer trend to create bespoke holiday packages with flights and accommodation booked separately on the internet, through travel sites such as Expedia, Lastminute.com and Ebookers.

Given this trend, it is hardly surprising that none of the big four have sizeable retail expansion plans. Indeed, TUI UK, which has just signed a property management deal with Lambert Smith Hampton, is widely expected to prune its Lunn Poly outlets.

Both Edwards and Richard Carrick, chief executive of self-catering specialist Hoseasons Holidays and a former MyTravel marketer, say that the number of internet bookings will increase as more people sign up to broadband. Carrick says: “I believe that fewer people are prepared to shop at travel agents. The Web has allowed consumers to become experts in travel. There is a perception that the Web is cheaper, too, though in reality that may not be the case.”

However, he adds that the big four are driving direct sales and “sell more on the phone than they are prepared to admit publicly”. 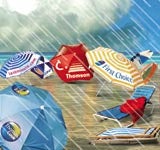 The Web’s not working

Although there is a move towards internet bookings, some online companies are also having a tough time. Many compete directly with the tour operators by offering cheap packages, as well as allowing holidaymakers to create bespoke getaways. Ebookers has issued a number of profits warnings and Lastminute.com reported poor second-quarter results three weeks ago. Pre-tax losses were up 39 per cent, to &16.9m, partly caused by absorbing acquisitions such as Holidayautos.com.

These companies rely to a large extent on the distressed inventory of tour operators, cruise companies, hotels and other travel sectors and make their profit from the margin between the price paid for stock and the price it fetches on the websites.

However, they are facing something of a supplier backlash. Tour operators are improving their management of the number of packages they provide each season to the travel market and are investing in their own direct websites to clear excess stock.

The hotel market, which is experiencing a post-September 11 resurgence, wants to increase room prices and regain control of its inventory. In the US, hotel giant InterContinental Hotels Group, which owns Holiday Inn, Crowne Plaza and other brands, has announced it will no longer deal with IAC/InterActiveCorp’s online company Expedia – calling into question the future of Expedia’s sister company Hotels.com.

Oriel Securities leisure analyst Mark Brumby says: “The online operators are agents: they do not control what stock they have – and if their suppliers have developed an internet model to be as efficient, then the online vendors have not got a business.”

Not only are companies such as Travelocity, Octopus, Opodo and Ebookers having to cope with a reduced product supply, they are also on the back foot when it comes to the public’s recognition of their own brands versus those of established tour operators.

A spokeswoman for Lastminute.com claims that the issues between InterContinental and Expedia are very much a US problem and that relationships with suppliers in Europe are stronger, but she admits that there is increased competition. She adds: “There is still a long-term value in the business – we offer a much more comprehensive lifestyle service.”

The travel agents, too, are fighting back against the dedicated online companies. CTTG has carried out research on the time it takes to research and book a holiday on the internet, and found that it is speedier to visit a travel agent. The company will use the information for a PR and possible ad campaign.

Tour operators are also raising their game by investing in new methods of marketing. Edwards believes in making TUI a “power brand” and in partnership with Thomson, the brand has sponsored Tottenham Hotspur and Sky News Weather, and is appearing in a TV branding campaign. Conversely Thomas Cook, probably one of the most recognised brands in travel, has decided it does not need to advertise and recently parted company with TBWA/London (MWJuly 22). Instead, it will concentrate on direct mail and database management.

First Choice, which analysts acknowledge has a robust business model thanks to its diversification into more specialist areas such as adventure holidays, sponsored the successful TV show “I’m A Celebrity… Get Me Out Of Here” earlier this year (MWNovember 13, 2003). The company is still considering its marketing strategy for 2005.

But not all operators have managed to ride out these troubled times. Travelscene went bust last week partly thanks to the trend towards independent travel, fuelled by cheap flights from the likes of easyJet and Ryanair. As a consequence, the company’s sales director, John Harding, has stepped down as president of the Association of British Travel Agents (ABTA) ahead of its annual conference in November.

Meanwhile, analysts believe time could also be running out for MyTravel, which discovered a large black hole in its accounts in 2002 and has suffered an exodus of senior executives. The latest to leave is MyTravel Airways chief operating officer Tim Jeans. The company is trying to restructure, but is not believed to be able to hedge its fuel orders.

TUI may also face a sale or break up: its biggest shareholder, WestLB, has indicated it wants to sell its 31 per cent stake. The move has been triggered by the investment bank’s drive to sell off non-core assets rather than the troubles of the travel industry.

Brumby does point out that recent massive upheavals, from September 11 to the Iraq War, have meant “the past four years have been very difficult to measure and compare” in the travel industry. He says there have been distortions in the market: in the first quarter of last year, for instance, the Iraq War dampened bookings, then in the second the “Baghdad bounce” saw them strengthen.

And a measure of optimism is returning to the travel industry thanks to reports of a more buoyant August, and there are hopes that this will continue through to the end of the main holiday season in September.

But few things are certain in the travel industry, subject as it is to world events like acts of terrorism, fluctuations in exchange rates, changing consumer tastes and the burgeoning price of fuel. Future survival in a very competitive environment will depend on flexibility and quick responses to consumer trends.