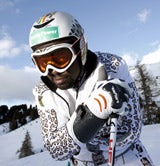 Nkrumah-Acheampong, who had not skied outdoors until four ago, will take part in both the slalom and giant slalom at the games in Vancouver, which start on 12 February.

The bookmaker will support the “Snow Leopard”, a 500/1 outsider to win gold, by providing access to ski technicians, physios and training venues in Vancouver.

The Winter Olympics has thrown up several unlikely contestants and cult heroes in the past including Great Britain’s ski jumper Eddie “The Eagle” Edwards in 1988 and the Jamaican bobsled team, later immortalised in the film “Cool Runnings”.

A spokesman for Paddy Power says it wants to build support for the Olympian through PR and social media.

“We love the underdog at Paddy Power and believe he will be the big story of the Winter Olympics,” he says.

Ruth Mortimer on brands to watch