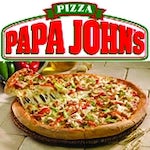 Prior takes over from Simon Wallis, who is currently on gardening leave with the company ahead of joining rivals Domino’s Pizza as its new sales and marketing director in June.

Wallis is replacing Robin Auld, who is leaving Domino’s after six years “to pursue new challenges” with the company, as exclusively revealed by Marketing Week in January.

Prior will take up his new position at Papa Johns this week. He is also the owner and director at overseas estate agents Undiscovered International Properties.

His last marketing role was as marketing director at Toucan Telecoms, which he left in 2007 following the company’s sale to Pipex for £24m.

He started his career at Unilever, where he worked for six years and left as international marketing manager for brands including Hellmann’s, Lesieur, Ambrosia, Alsa and Napolina.

Papa John’s is the third largest pizza company in the US but it has so far failed to make an impact in the UK. It opened 24 franchised stores across the UK last year and hopes to open 40 more in 2010. In the last quarter, it saw an 8.6% increase in sales.