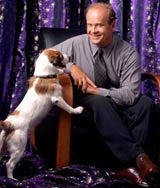 The Paramount Comedy Channel, which produces Frasier and Sabrina, The Teenage Witch, has switched its £2m advertising account from TBWA/London to Farm.

The channel is reviewing its media planning and buying account, which for the past four years has been handled by BLM Media. Paramount marketing director Chris Hancock is understood to be handling the review.

Farm has been handed the business on a project basis.

TBWA/London has worked on a series of TV campaigns for the channel using the strapline “Comedy is Paramount.” One ad showed a group of tourists on an open-top London bus listening to a tour guide’s alternative and amusing version of the history of capital. Other ads featured obsessive Father Ted fans and practical jokers playing pranks on their friends.

Paramount is a digital channel broadcast on platforms such as Sky Digital and cable giant NTL. Viacom owns a 75 per cent stake; BSkyB 25 per cent.

Launched in 1995, the channel was rebranded as the Paramount Comedy Channel in 1997.

With the launch of Channel 4’s E4, Paramount has come under increasing pressure as the two channels chase a similar audience.