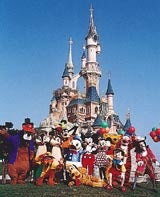 The two organisations are to merge in July, and will jointly market Disney’s US and French theme parks in the UK, Ireland and Scandinavia.

Rzymowska becomes vice-president marketing and sales UK, Ireland and Nordic, effective immediately. WDP&R marketing director Pat Mitchinson and DLRP head of marketing Tamara Sangvi will report to Rzymowska during what Disney calls the “pre-integration phase”. WDP&R also handles UK marketing for the Walt Disney Travel Company, but this unit will continue to report to corporate headquarters in Florida, and it is unclear whether it will also be integrated.

A Disney spokeswoman says there will be no redundancies in the marketing department or any agency reviews. Leo Burnett handles advertising and direct marketing, and BBJ and Starcom Motive handle media for both units.

The plan to merge WDP&R and DLRP was announced at the beginning of September, but was then put on hold following the September 11 terrorist attacks and the March opening of the new Disneyland Resort Paris attraction, Walt Disney Studios. The spokeswoman says that other European territories have already merged their teams, but the UK is the biggest national market and hence is taking longer.