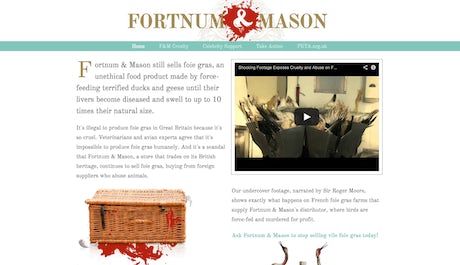 The PETA website features the words “Force-Fed & Murdered” presented in a style that evokes the Fortnum & Mason logo. The overall website also mirrors the look and feel of the retailer’s online presence.

The animal rights charity has previously launched a number of parody websites in the US, such as kentuckyfriedcruelty.com and bloodyburberry.com, but says it was banned from doing so in the UK due to rules that protected copyright from parody, caricature and pastiche.

However, a new law brought into effect on 1 October now allows for a parody exception to copyright.

A ruling from the European Court of Justice (ECJ) says the exception will apply if the creative evokes existing work while being different from it and constitutes an expression of humour or some form of mockery, according to Iain Connor, partner at law firm Pinsent Masons.

“This should allow brands to use work in a satirical or humorous way without being deemed an infringement of copyright,” he adds.

Prior to the law change brands risked being sued for copyright infringement if they strayed too close to another company’s branding. For example, Asda launched a marketing campaign in 2009 that used the slogan “Be a real spec saver at Asda” and “Spec Savings at Asda” that the ECJ ruled infringed copyright.

Connor believes the new ruling should allow such campaigns and mean brand owners can have a “bit more fun”, with charities and challenger brands the most likely to take advantage of the law. PETA has already promised that it is planning more parodies as it looks to take on brands it accuses of animal rights infringements.

“If brands want to run a cheeky ad campaign this new ruling should allow the creative to get a bit closer than they would have done before. We should see a bit more risqué advertising,” he says.

Ciara Cullen, senior associate at law firm RPC, agrees, saying the new rule should be a “very useful tool” for the ad industry, allowing brands to have a “fun dig” at rivals by parodying their ad campaigns.

However, Connor warns that the new law does not give brands “carte blanche” to parody rival’s branding because laws on trademark infringement, defamation and fair dealing still exist.

He also advises that, while parody has its place, it has to be used in the right circumstances.

“Lots of brands want to ensure their brand ID is not in any way associated with any other brand. Parody can easily blur the message and for certain brands it will never be appropriate. You’ll never seen Pepsi take on Coca-Cola,” he adds.

Dan Smith, director of and head of advertising at law firm Wragge & Co, cautions brands that the exception is “far less far-reaching” than many people think and that brands should look very closely at whether their work would be safe from legal ramifications before launching campaigns.

“I honestly don’t think [the new rule] will have a great deal of difference. This will not usher in some kind of brave new world of creativity. Brands quite rightly jealously guard the look and feel they have built up around products and advertising and if a rival tries to adopt certainly elements they could be sued,” he adds.