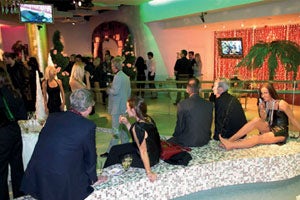 Nibbling strawberries and quaffing champagne with people you barely know, in a soggy marquee adjacent to a sporting arena has been a staple of business life ever since corporate entertainment was invented by Margaret Thatcher’s yuppies in the 1980s. But, as invites to traditional, classic events such as Wimbledon, Henley or Twickenham pile up on desks, questions are being asked about how effective and appropriate this kind of corporate entertainment is.

“Very often it is the case that someone senior in a company likes rugby, for example, so that is what the hospitality revolves around,” says Cavendish Hospitality managing director Simon Gillespie. “Traditional, annual sporting and cultural events are the most popular, but there is always a demand for something new and different – more bespoke and smaller.”

A common complaint is that not enough research is done into what people actually want. While sport isn’t everyone’s cup of tea, Wimbledon remains one of the few invites that is rarely turned down. But this is also reflected in the astronomical costs – a package for the Men’s Final on Centre Court can cost £2,700 per person.

Events can be modified to create wider appeal. “Another option is to add some further thought or excitement to classic sporting events. For example, why not get to the event by helicopter?” suggests Unmissable head of operations Libby Christie.

Family days at sporting events, with dedicated entertainment for children, have proved popular, says Ubogu. Companies such as Tinies have sprung up to offer mobile crèches, and even provide nannies.

Corporate hospitality hosts are now thinking more about who they are inviting and why. If the event is just a “thank you”, the kind of occasion doesn’t matter, but otherwise the amount of quality time people get with their guests is important.

“It buys access with people. You exchange numbers and you are more likely to call them up afterwards, or you will find it harder to write a bad story about them,” says a financial journalist for a national newspaper.

He suggests corporate entertainment that has some link to the business is most effective. For instance, Scottish financial services companies do a lot of entertaining around the Edinburgh Festival.

Making the events feel different, rather than off the shelf, is not always easy. Ascot, like many other race courses, relies on corporate entertainment for much of its income. For its Christmas party season this year, Ascot Hospitality director of sales and marketing Gary England decided to bring Immodesty Blaize, a burlesque dancer and the UK’s answer to Dita von Teese, on board. A spokeswoman says there have been some questions about the performance, but that it isn’t intended to exclude anyone. “It is nothing like pole-dancing, far less risqué,” she says.

Yet entertainment of this kind has traditionally been offered and even expected as part of corporate hospitality. Pole dancing, strip clubs or “gentlemen’s clubs” are sometimes tacked on as part of the evening’s fun in the more male-dominated sectors.

“Even now, at a certain time, the women will be thanked and sent home, because it is time to entertain ‘the boys’. They are ignoring half their market and insulting the intelligence of the other half,” says a senior female PR professional.

She says companies aren’t too worried about reputational risk: “By going to a ‘men’s club’, you are making your guest complicit, sharing a guilty secret. You bind them closer to you.” She is also scathing about attempts to entertain women. “Spa days are a bit patronising,” she suggests.

BDGworkfutures managing director Gill Parker says her main concern with corporate hospitality is compliance. “We have to be careful that it isn’t purely a gift,” she says. “At one event, we were taken to the races and given an envelope with betting money. I felt that it crossed a boundary, so I used my own cash to bet and gave their money to charity.”

With tighter corporate governance, companies are now approaching corporate entertainment more strategically. Companies such as Eventspoint not only arrange events, but carry out audits into their success.

“Increasingly, procurement is getting involved, and events organisers are asking how we can show a return on investment. Get it wrong and corporate hospitality can be both expensive and do a lot of damage,” says Eventspoint managing director Philippa Bovey.

“Corporate entertainment is about building relationships, which can only be effective if done very subtly,” she advises. “You can’t send an invite to a fabulous event out of the blue – they will think you have more money than sense. Blatant wooing is a mistake, and you also have to consider what is appropriate at the time,” she adds. “For instance, if you are involved in a tender at the same time, it could be counterproductive.”

We are some way from all corporate hospitality having to be declared, as it does for politicians. But increasing auditing and accountability might make events more relevant and enjoyable for both hosts and guests, and could see it given more of a priority as an effective use of marketing spend. While the out-and-out jollies of the Thatcher era might soon be a thing of the past, strawberry-growers should not worry just yet.