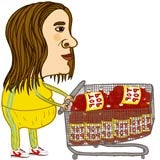 Point-of-purchase (PoP) is often perceived as the poor relation of marketing. By its very nature, a supermarket display is nowhere near as glamorous as a TV or press advertising campaign, although it is certainly a lot cheaper.

This partly explains PoP’s less heralded status in the marketing mix, even though it plays a vital role in the purchasing decision. In fact, some would argue that it is the most important medium of all.

Mark Pollard, sales director at ambient-media specialist Traffic Media, says: “We think PoP is the next big thing and is not as exploited as it could be. TV and press advertising are good at general awareness to a wide audience, but a very high percentage of purchase decisions are actually made when people are in store.

“We treat the PoP display as the last 30 seconds of your advertising campaign. You can crucially influence consumers while they are standing there making a decision.”

Pollard’s views on PoP are generally not disputed. But despite this, ad agencies are not employing planners to help ensure the medium is used appropriately, something of an anomaly given that they have become such an integral part of other media campaigns.

This does not necessarily mean that the planning aspect of PoP is being overlooked by agencies. A far more likely scenario is that agencies’ own staff are carrying out the job. Paul Biggins, managing director at marketing services agency Tequila Manchester, echoes the view of a number of agencies when he suggests that PoP doesn’t require specialist planners, and can be dealt with just as well by account handlers.

He says: “The advantage of account directors getting involved in planning is that a lot of their role is strategic input and PoP is a strategic element of the mix we’d recommend to clients. They are also the closest point of contact with the client, and understanding what you can and cannot achieve with PoP is really about understanding what’s going on in the retail environment, because it changes frequently.”

Lindsay Howard, director of sales and marketing at Antone, a designer, manufacturer and installer of retail interiors, agrees with Biggins. She points out that Antone doesn’t have separate planning departments within the agency because its account handlers, who all come from a marketing background, have the requisite planning skills. She also stresses that this does not diminish the role planning needs to play in PoP.

She says: “You can have the best design but if it’s projecting the wrong message it has no purpose. If you don’t understand the consumer, the retail environment and the buying cycle shoppers go through, you’ll send the wrong messages at the wrong time. That’s why planning is such a crucial part of PoP.”

Problems can arise when PoP is not recognised as a distinct entity within an agency and is perhaps classed under an outdoor or ambient category, because this is likely to mean it will not receive the attention it deserves. That said, even within agencies that focus on PoP individually, it might typically be last on their list of priorities.

“Planners are spending a lot of clients’ money and are obviously focusing on things that are known quantities, such as posters, press and TV. We don’t say PoP should be used instead, but we do say it should be added to any campaign,” says Traffic Media’s Pollard.

Steve Connors, chief executive at marketing communications agency Geoff Howe Independent (GHI), also suggests PoP’s profile is too low in many agencies. He says: “Whereas TV and promotions are dealt with by senior marketing people, point-of-sale gets pushed down to juniors.

“The crazy thing is that packaging, design and point-of-sale are up all year round, whereas your ad is only there for a short period. Also you need to get point-of-sale and signage correct before you start promotions and advertising, and that takes quite a bit of planning.”

Having recognised the importance of planning, GHI has created a merchandising catalogue to aid the design and supply of PoP material for pet-food supplier Hill’s Pet Nutrition, a division of Colgate-Palmolive.

Connors explains that the agency does have planners, in a sense, who refer to the catalogue to evaluate what sort of point-of-sale material is needed, where it should go, and what design it should be.

He says: “The catalogue has developed into an efficient planning tool. In planning point-of-sale, it can take into account which area you want to own, and what key communication messages you should have to influence those particular areas. So, for example, what your message and signage should be outside the store as opposed to when you first go in. Or, what should it be off-shelf and what should it be on-shelf?”

The catalogue has been particularly useful because Hill’s required PoP planning across a number of European countries.

Connors says: “If you’re not planning centrally and at a senior level then people, especially across different countries, can come up with different looks, different styles and different quality. You can end up with deviation from what the brand equity should be.”

Another important aspect of PoP planning is considering the needs of the retail outlet and finding out its policy on point-of-sale material. The store may, for example, impose restrictions on the amount of space that can be used.

Typically the brand and the store have different objectives – especially the major multiples, which have their own brands to consider – so the agency often acts as a go-between between the brand and the store. Charles Endacott, managing and creative director at marketing services company Endacott RJB Marketing, suggests that if the agency has to carry out this type of function, a planner is definitely required.

He says: “If you’re talking about someone who understands the retail policy for PoP, how it’s applied, and what restrictions they put on it, then yes, a planner is a good idea.”

As is the case in other agencies, however, Endacott RJB Marketing has individual account teams that are involved in all aspects of the client’s business, and this includes an understanding of retailers’ requirements for PoP.

But he believes PoP can quite adequately be looked after by account handlers. He says: “Point-of-sale is a composite part of an overall campaign, and therefore it falls within the management of that campaign. To justify a planner for one element of a campaign would be difficult, I think.”

But the consensus is that point-of-purchase still lags behind other forms of marketing communication in terms of its evolution. So perhaps, over time, PoP will develop enough for planners to become part and parcel of the industry. Howard, for one, believes so. She says: “You may get someone in our industry who is called an account handler but has a very strong planning mind. That’s where we sit today, but as we grow and the industry develops, then I think you’ll need dedicated planners.

“That said, you don’t want to re-invent the wheel, and if the planning has been done at an advertising level you don’t need to do it again. Equally, why start the process with advertising, why not start with retail interiors?”

The attitude of the majority of agencies appears to be that planners are unnecessary. This is not so much an indictment of PoP, but rather it highlights the fact that account handlers are regarded as planners as well. It also suggests that PoP doesn’t have a high enough profile within many client organisations.

If agencies raised the importance of point-of-sale so that it’s the first thing that is done correctly before they even start to spend money on TV or press, planners would not only be justified, but the whole PoP industry would probably benefit by evolving to a much higher level.