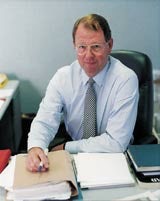 Ian Pay has stepped down from his post as chief executive of the free newspaper London Metro, and is to leave publisher Associated Newspapers after 18 years.

Kevin Beatty, managing director of The Evening Standard, will take over the role as a member of the Associated board.

Beatty will be supported by Mike Anderson, who moves across from Associated’s contract publishing arm Contract Mail, where he was managing partner, to become deputy managing director.

Beatty says: “After a long and distinguished career with Associated, Ian has decided to step down.”

It is not known whether Pay, who has been managing director of both The Standard and Mail on Sunday during his time at Associated, has a job to go to.

Beatty says of his new responsibilities: “We don’t see any conflict. We have two great publications – one’s in the morning, available to commuters, and the second is a paid-for London evening newspaper.”