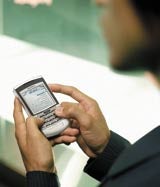 The days of being off at a meeting and out of touch with the office are over, thanks to the rise of mobile phones and, increasingly, personal digital assistants (PDAs). And one device in particular has captivated the business and media community: the BlackBerry.

Today, while most people shy away from the idea of being without a mobile phone, few would profess to be in love with their handset. Users of BlackBerries, on the other hand, are often enamoured of these handheld devices, which give them wireless access to phone, e-mail and Web services as well as organiser functions, combined with the ease of a Qwerty keyboard.

Indeed, mention the BlackBerry at a business lunch and half of the room will whip theirs out to show you – such is the addictive nature of this device that it has been dubbed the “crackberry”.

Yet, while the BlackBerry may be the darling of the media and business communities, it – along with the other wireless handheld devices on the market, such as the PalmOne, a descendant of the Palm Pilot – has yet to follow the mobile into the mainstream.

To date, Canada-based RIM has used a variety of regional agencies for its advertising but in the main has relied heavily on PR and word of mouth to raise awareness of its products. This has been a successful strategy: for the first quarter of 2005, RIM reported revenues of $454m (£257.6m), up 12 per cent on the quarter and 68 per cent year on year. At the same time, it revealed that there are now 3.11 million BlackBerry subscribers around the world, up 24 per cent on the previous quarter.

But to maintain this rate of growth, RIM will have to find a way to develop BlackBerry as a consumer brand, in order to extend its reach outside its core market of businessmen and technophiles. Giles Lury, director of brand consultancy The Value Engineers, believes that BlackBerry has many of the vital building blocks to create a brand, but that RIM must act quickly. He says: “The BlackBerry does have a lot of things going for it, such as the ‘crackberry’ nickname and the body language that has developed as a result of the two-thumb typing. The danger is that its development could be fast-tracked and the name BlackBerry may end up becoming synonymous with the category.”

Lury says that RIM faces a challenge creating a consumer brand with long-term potential out of a piece of technology, although he points to Apple’s iPod and Microsoft’s Windows as examples of where companies have succeeded. He says: “I think RIM has played the same game as other technology companies that moved into the mainstream.”

The PDA market is becoming increasingly competitive with a wide range of companies such as Microsoft moving in. To combat this, RIM has developed a large number of alliances and partnerships with technology, software and telecoms companies. These include AT&T, IBM, Microsoft, Samsung, Sony Ericsson and Vodafone. These deals allow BlackBerry to extend its influence by offering its technology in a great variety of products.

But the biggest challenge facing the PDA sector comes from smart-phones: mobiles that offer a similar specification to wireless PDAs but have a stronger emphasis on voice services. Industry observers point out that mainstream consumers have already become used to carrying a mobile, and as such may be reluctant to start carrying a PDA as well as or instead of their phone.

While BlackBerry’s technology will be available in voice-driven products, thanks to its partnerships and alliances, RIM will have to develop the voice capacity of its own products if it going to remain a serious con

Research In Motion was set up in 1984 by engineering students Mike Lazaridis, now president and co-chief executive, and Douglas Fregin, now vice-president of operations

The company floated on the Nasdaq exchange in 1999

The BlackBerry wireless e-mail service has been available in the UK since 2001. The first network to launch it was the then BT Cellnet, now 02

RIM had a five per cent share of the UK PDA market in 2004, according to Mintel