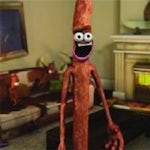 Unilever launched the initiative last August and announced it was turning to crowd sourcing for its Peperami ad campaigns, ending a 15 year relationship with ad agency Lowe.

The creatives were Kevin Baldwin, a copywriter from London and Rowland Davies, an ex-creative director from Germany. The ad was produced by BPL Marketing.

Animal narrates the ad, which features mini “mischievous” versions of the character at various points throughout the day. The ad closes with Animal being eaten by the mini Peperami characters.

The ad will air on 23 August during the commercial break between Coronation Street on ITV and will later show during the break in Big Brother on Channel 4.

Matt Burgess, managing director of Peperami, says: “Peperami is a brand which is bold enough to experiment with new ideas and advertising techniques in an increasingly consumer driven world.

“Today’s consumers are looking for new levels of brand engagement and this experiment shows that for the right brand, crowd sourcing can be an excellent vehicle for creative consumer interaction.”