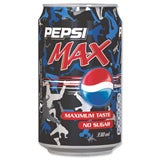 The Max It Legends campaign, created by AMV.BBDO and production company Unit9, centres around a site which introduces three older characters who have already lived their life and are looking to help young men do the same.

The competition asks participants to create a 60-second film about why they’ve lost their oomph around one of three topics: football, music or film. The winners for each category win the help of one of the characters, a team of assistants and £50,000 to make their dreams come true.

The public will choose which video wins, with Pepsi encouraging teams to post their videos to their social networks to get votes from friends.

Pepsi Max will also be promoting the competition through its social media channels on Facebook, Twitter and YouTube. The campaign will then use these channels to follow the story of the winners, posting updates on a dedicated blog and the Max It Legends website.

The campaign launched this week and runs until November, with each category challenge running for at least seven weeks.

Ahmed Abdel-Karim, UK marketing manager, says: “’Max It Legends’ is all about engaging people,  bringing mates together and giving them the opportunity to max their passions in life by making their dream moment a reality. We’re really excited to hear about the ultimate experiences of our Pepsi MAX fans, kicking off with the football challenge, and see what amazing and imaginative ideas they come back with. It will be fantastic to see the winning idea come to life later in the year. ”

Participants should upload their video on to www.MAXITLEGENDS.com for the public to watch and then vote for their favourite video. The winning suggestion will be announced in early June 2010.

This story first appeared on www.nma.co.uk and was updated by Marketing Week later.