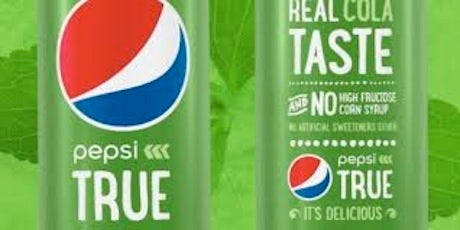 The drink will come in 7.5-ounce cans, each 60 calories when it goes on sale on Amazon later this month. It will then roll out to supermarkets in the US at similar price to Pepsi, the company adds.

It is the first new variant since Pepsi Next, which is being phased out after just two and a half years following complaints of a bitter taste. While Pepsi True bares similarities to its lower calorie predecessors, the business is banking on evolving consumer attitudes and tastes towards more natural beverages to ensure success this time round. Pepsi Raw, billed as an all natural cola, was withdrawn for the UK market in 2010.

The launch kicks off a new front in its battle with rival Coke following the debut of Coke Life brand earlier this year. Like Coke Life, Pepsi True is talking up how the use of natural sugar captures the true taste of cola in early communications around the product.

The soft drinks giants are facing tough challenges due to a shift in consumer drinking preferences in mature markets, away from carbonated drinks toward healthy alternatives. The increased health awareness has lead to flat sales so far this year for both, underlining the need to offer more choice.

Despite Pepsi sales still making a significant proportion to the business, it has been on an innovation diet to cut back on the sugary carbonated beverages. PepsiCo now gets 20 per cent of its revenue from its nutration business, which helped the company beat financial targets last year. Over the last year the company has acquired non-fizzy drinks such as Gatorade, Naked Juice, Sobe and Tropicana, investments that have led to less than 25 per cent now coming from cola in North America alone.

Coke has bolstered its response by acquiring a stake in energy drink business Monster, that will see it look to accrue additional revenues from the sub-category.