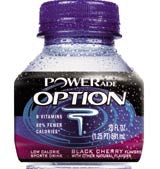 Pepsi is taking Coca-Cola to the US federal court over a television ad for energy drink Powerade that Pepsi claims is false and deceptive.

PepsiCo’s Gatorade beverage business filed a lawsuit last Monday against Coke’s Powerade Option team to stop the ad campaign, which features a drag race between two farmers riding horse-drawn carts loaded with hay bales – one with ten bales and one with 50.

The ad shows the cart with fewer bales coasting to victory and claims that Powerade Option has ten calories per eight ounce serving, compared to Gatorade’s 50 calories.

The suit seeks a permanent injunction barring Coke from running the ads, which were launched last week at the start of the NCAA men’s basketball tournament.

Coke denies the Powerade Option ads are untruthful, and says Gatorade has no research to prove its allegations.

Coke launched Powerade Aqua+ in the UK last October and has not ruled out bringing Powerade Option over to these shores from the US. Last November Britvic launched PepsiCo’s Gatorade into vending machines all over the UK.