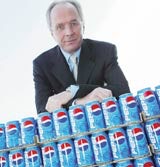 Pepsi has finally announced a £20m sponsorship deal with the Football Association (FA), in a development that will see the soft drinks company become the FA’s official drinks provider, as well as being partially responsible for FA entertainment ventures in a global partnership with Sony.

The sponsorship, which covers the FA Cup, the England team and the FA Youth Cup, will also be used to launch the Aqua Fina water brand in the UK.

Pepsi joins Carlsberg, Nationwide, Umbro and McDonald’s as FA sponsors. The deal, which was announced this week, comes after months of negotiations between the FA and Pepsi and marks the completion of the £100m FA Partners programme.

Pepsi is sponsoring the youth “pillar” of the Partners programme. It will be responsible, in partnership with Sony, for initiatives such as England team songs and entertainment before major football events, including the FA Cup final.

As well as becoming official soft drinks provider with its Pepsi Cola brand, Pepsi will use the sponsorship to launch Aqua Fina later this year. Pepsi brand Gatorade will become the FA’s official sports drink.

Pepsi’s involvement with the England team strengthens its relationship with England captain David Beckham, as Pepsi already has deals with Beckham and his club, Manchester United. Next month, the company launches a global television ad with a “wild west” theme, featuring Beckham and other high-profile players from around the world.