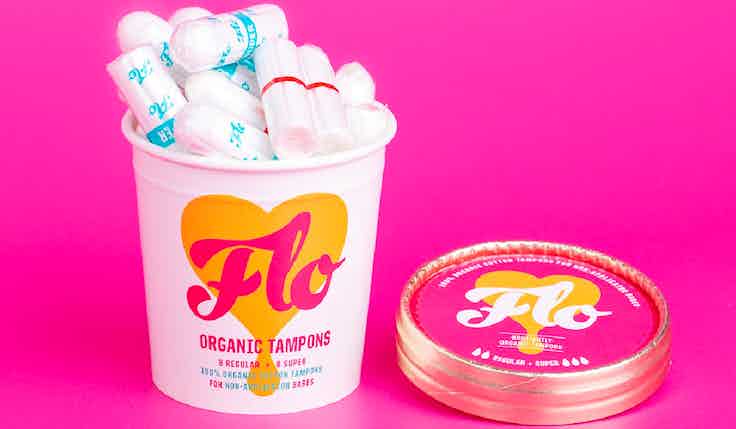 Co-founded in the bathroom of a London university four years ago, Here We Flo is on a mission to take on FMCG giants P&G and Essity with its sustainable and organic period and incontinence products.

Then Masters students, Tara Chandra and Susan Augustin stumbled on the business idea as Chandra complained about the lack of organic tampons in UK retailers, and her frustration at having to buy them online.

With that, Here We Flo was born – a brand aiming to disrupt the period, bladder and sexual wellness markets with its promise of ‘shamelessly natural care for life’s messiest moments’. While the business has dabbled in reusable products, its focus is on organic tampons and pads.

The category is already dominated by the likes of P&G’s Always and Tampax brands, as well as Essity’s Bodyform and Tena. As a result, many challenger brands have focused on growing through direct-to-consumer and online sales where there are fewer barriers to entry. But Here We Flo has been laser-focused on bricks-and-mortar retailers from the start.

“When you say category changer, it’s not enough to say it’s going to be sustainable, biodegradable, or carbon neutral. None of those things matter unless you get a foothold in the mass market,” Chandra tells Marketing Week.

“You can have the most green product ever – and of course, there are companies which sell more reusable products than us. But if you’re not addressing the 96% of the market, which is still plastic, synthetic products, you’re never going to see the change.”

She explains Here We Flo is determined to meet customers “where they are”, with a product that fits their lives and at the same time reduces landfill and carbon emissions.

The brand is now available in-store in mass market retailers such as Boots, Holland & Barrett, Ocado and WH Smith. Around 75%-80% of the business’s monthly revenue comes through its retail partners, while the remaining 20%-25% is made up of Amazon orders and its subscription service.

In a world where we’ve achieved our mission, there’s no shame in using our products.

It was somewhat of a surprise to the business that the monthly subscription service didn’t become a larger source of revenue, Augustin says.

“Our original thinking was periods are cyclical, so a monthly subscription service should work really well,” she explains. However, the reality for people who have periods is that most don’t know exactly when they are going to start.

“It’s a really convenience-driven purchase,” Augustin explains. This has been borne out in behaviour Here We Flo has seen among its customers. Subscribers often unsubscribe after twelve months because the timing is off-cycle, meaning they are either left with too much or too little product.

“It actually works better in retail,” she says.

Here We Flo is far from the only startup brand in the sustainable period-care sector, with others including Dame, Modibodi, Thinx, Mooncup and Daye offering everything from reusable pads and period underwear, to menstrual cups and CBD tampons.

However, Augustin says she doesn’t see these other challenger brands as competition. Instead, the combined strength of these brands helps to better spread the message of sustainability and health, and to educate consumers – something a larger brand would have the marketing budget to do on its own.

“We don’t see other challenger brands as competition. We want to take market share from the P&Gs and those larger companies that have owned the market,” she explains.

To ensure it has the potential for mass market appeal, Here We Flo’s product strategy can be summarised as three A’s: “affordable, accessible, adorable”.From periods to menopause: How marketers are challenging the ‘last taboos’

Organic products, particularly those produced by smaller companies, are by nature at the more expensive end of the market – but Augustin says the business has made a “conscious decision” to remain within 30% of the price of corporate alternatives to ensure its products are as affordable as possible.

Meanwhile, the “adorable” element of the strategy is exemplified in Here We Flo’s product packaging. Modelled to look like an ice cream tub, the packaging is designed to grab immediate attention on the shelf, as Augustin claims categories with associated stigma have just a three-second dwell time.

The packaging is also designed to look “fun” to remove some of the shame in having period products on display in bathrooms and encourage customers not to “hide them away”, she adds.

Having secured its place on the shelves of popular UK retailers, Here We Flo is now taking steps to accelerate its growth – including the launch of its first TV ad.

The spot launched on TV in April, after the brand won the Grand Prix £1m-airtime prize from the inaugural Sky Zero Footprint Fund late last year. Chandra and Augustin were encouraged to enter the competition by angel investor Bruce Crouch, a former executive creative director (ECD) at BBH, now ECD at Hatch London.

“I don’t know if I would have had the confidence to do it to be honest. I would have thought a big company would win,” Chandra says.

“But everyone at Sky and on the judging panel really seemed to connect with what we are doing and they liked our approach of being funny.”

‘No more period dramas’ offers a tongue-in-cheek take on the classic British period TV drama. Centred on a dinner table hosting well-to-do men and women, one lady interrupts the conversation to announce that she is in “a bloody mess”, referring to her period. The women around the table then launch into a discussion about organic tampons, while the men around the table look aghast.

In Chandra’s view, to go mass market a brand needs to “start conversations” without being “preachy” – and not just with its target demographic.

“It’s about starting conversations with men, people who are in menopause, across the strands of society,” she says.

“It’s about creating environmental change, but also cultural change. That comes with starting conversations and making people laugh and smile. TV is such a great medium for that and we were lucky to win.”

Unsurprisingly, not every viewer had something positive to contribute. While a “huge” age range of women enjoyed the ad, the brand experienced its fair share of outrage, with both men and women expressing they did not want periods spoken about in this way.

Yet, even though the initial ad was only a “small” test before a bigger autumn campaign, the brand did see “some nice bumps” in sales, Chandra says. Indeed, with its humorous approach towards a topic surrounded by stigma and taboo, the ad was found to have been the most creatively effective TV ad of April by Kantar’s monthly study ‘The Works’.

When you say category changer, it’s not enough to say it’s going to be sustainable, biodegradable, or carbon neutral. None of those things matter unless you get a foothold in the mass market.

Chandra says the brand has also had a number of retailers and partners reach out following the launch of the ad. “It lifted us above the parapet,” she says.

The brand already has the next “three or four” executions in mind, which include playing off other popular British period dramas.

“We’ve always wanted to meet people where they are and to be available very widely, so we can be a sustainable part of people’s lives and choices. [TV] really will let us do that,” she says.

Looking ahead, Augustin says the focus for Here We Flo is on becoming “more of a brand leader” in the UK, a goal which the full rollout of its TV campaign should help deliver.

“I feel like we’ve just scratched the surface. Not a lot of people know about us,” she says.

But despite still having so much room for growth in the UK, the brand is already looking at expansion into the US, where both Augustin and Chandra were raised. The co-founders see huge opportunity in the “massive” market there, noting the country’s bigger stores mean more shelf space and therefore “more appetite for a larger selection of brands”.

Augustin explains: “The US can be a tricky market to launch in and to penetrate, and we didn’t think we would be there for several years. But during the pandemic we got some organic demand and we’ve been able to build on that.”

The brand partnered with both Urban Outfitters and Costco during the pandemic, with further rollouts planned this year. How period care disruptor Here We Flo created April’s most effective TV ad

Over the long term, Here We Flo hopes its strategy of being “funny, feminist and fierce” will enable it to drive real culture change, removing stigma and shame for future generations, and providing better education around bodies.

“In a world where we’ve achieved our mission, there’s no shame in using our products,” Augustin says. To help drive this change, the business donates 5% of its profits to people and planet, with 3% specifically focused on helping girls and women – whether by fighting female genital mutilation or period poverty.

The brand also aims to position itself as one that provides its customers with “lifelong care” for “each and every one of their messily bodily moments”.

“We have built a brand that we really love and we’re excited that it’s resonating with people,” Augustin concludes.

“So our goal is to work on that and build an empire for the foreseeable future.” 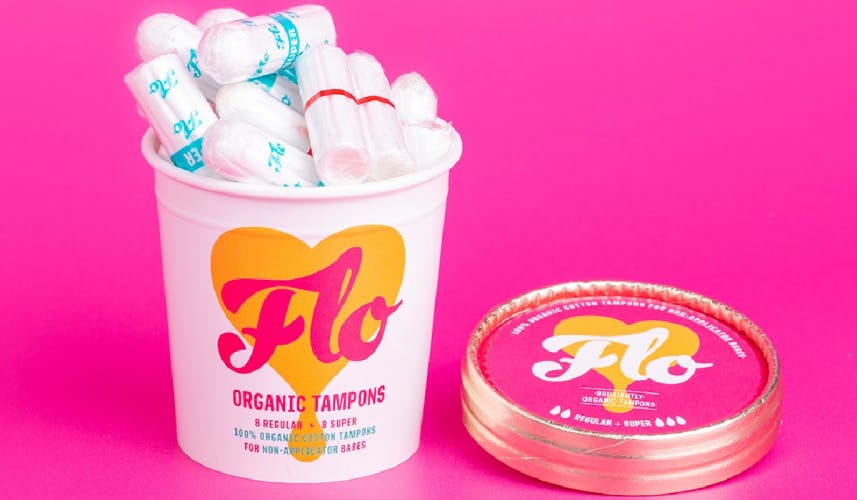 With its humorous take on period dramas, the TV debut of up-and-coming period care brand Here We Flo ranks highly on both distinctiveness and disruption – despite receiving its share of complaints. 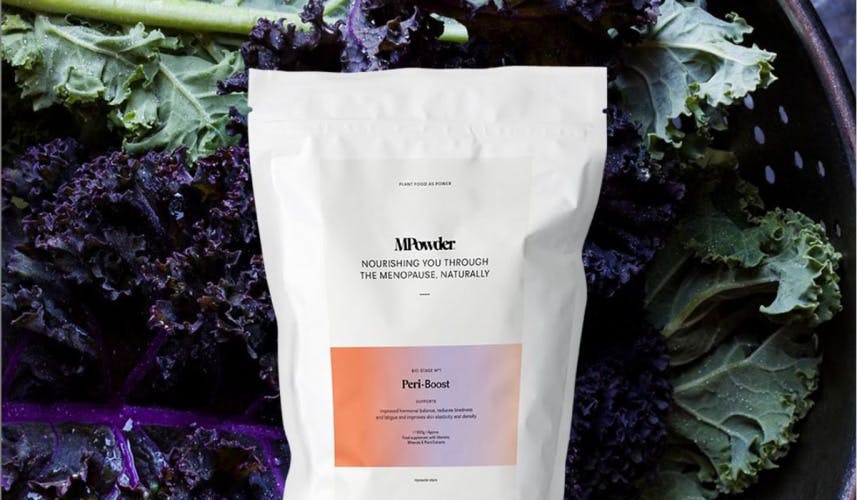 Marketing taboo products can be tricky with communications playing a key role in education, but restrictions can foster greater creativity. 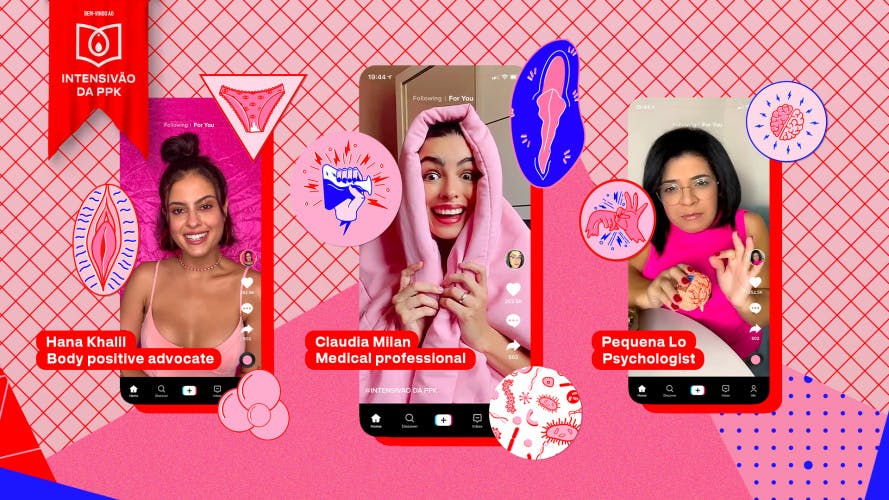