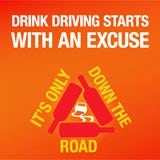 The campaign, which kicks off on Wednesday (1 December), will run on social media networks including Facebook, Spotify, listings magazine site Time Out and Microsoft’s MSN. It will also include outdoor ads.

The AA will run ads on its own website and in its online monthly magazine, which has a circulation of 1 million.

The companies aim to generate 10 million ad impressions via the digital campaign.

The campaign will run into the New Year and marks the first step in the partnership between the two companies to promote responsible drinking.

Drink-driving is most prevalent in 17-24-year-olds, according to the Department for Transport. This campaign will target this age group in a bid to encourage young drivers to drive safely and soberly.

The move forms the latest part of Pernod Ricard UK’s ongoing Accept Responsibility campaign, which it began three years ago.

The drinks maker is also to launch a multimedia responsible drinking campaign for rum brand Malibu next month.