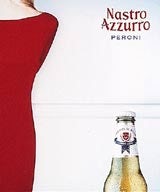 Italian brewer Peroni has announced that it is reviewing its &£3m creative advertising account, less than a month after appointing a marketing chief.

It is not known if the incumbent, Burkitt DDB, has been invited to repitch for the business or whether the media buying and planning account, held by MGM, will be affected by the review.

UK marketing manager Sandro Rucci, who joined the London office earlier this month, says Peroni is increasing its media spend from less than &£1m to &£3m. He previously worked in the marketing department at Peroni’s Italian headquarters and will report to UK export manager Tommaso Alessandri.

Peroni, which owns brands including Nastro Azzurro and Gran Riserva, is considering advertising on television for the first time, although initial activity will concentrate on cinema, press and poster ads.

Rucci adds: “The work produced by Burkitt was very stylish and effective, but we now want to add another element to create a stronger relationship between consumers and our brand.”

Burkitt DDB won the Peroni account in January 1999. Earlier this year, the agency created a print campaign for Nastro Azzurro, which aimed to build on the brand’s “Italianness”.

Peroni beers are distributed in the off-trade sector by Scottish Courage, whose holding company Scottish &amp; Newcastle acquired a quarter-stake in family-owned Peroni when it bought Danone’s Kronenbourg last year.

J Walter Thompson (JWT) London has made 19 people redundant and Leagas Delaney Group is laying off up to ten staff in the second major round of redundancies to hit ad agencies in less than a month. JWT, headed by Simon Bolton, announced its redundancies on Thursday last week. The cuts have been implemented across […]

The Diary has learned that Microsoft megalomaniac Bill Gates, not content with controlling the world Blofeld-style, now wants to get into the record books. To promote the launch of Windows XP tomorrow (October 25), Microsoft is trying to break the record for the fastest-produced music video, using the product’s editing equipment. The attempt will be […]

Chorion, the leisure and entertainment group, is searching for a head of children’s brands to develop its portfolio of kids’ characters, which includes Noddy and The Famous Five. The post has been created to maximise the opportunities for the company’s existing children’s properties in publishing, TV, film, promotions and merchandise as well as developing any […]