Research by Kantar Media on the emergence of a ‘four-screen nation’ shows one-third of UK adults have home access to four types of screen: television, mobile phone, tablet and desktop or laptop computer.

The increase in the numbers of owned devices combined with the tendency of consumers to divide their online browsing between these four screens is making it harder for marketers to target advertising and personalise the user experience. But companies have started to develop ways of tracking consumer behaviour across multiple screens while media owners, such as Facebook and Microsoft, are rolling out services to make this data more visible to advertisers.

In August, Facebook launched a reporting tool that enables advertisers to track a customer’s moves between mobile apps and the internet before making a purchase. The new cross-device tool allows advertisers to view aggregated and anonymous reports about the devices on which consumers view adverts and those on which conversions subsequently occur.

For example, a marketer can determine the number of customers who click on an ad via an iPhone but later convert on a desktop PC, or the number of people who view an ad on their desktop but convert via an Android tablet.

Gabriel Francis, product marketing manager at Facebook, says the insight produced by the tool “lends additional evidence to what we have always inherently known to be true”. He adds: “People are influenced by advertisements across a variety of devices and screens and often end up buying in a completely different place – on the web, in apps or in store.”

Facebook’s own research in the US found that, of the people showing interest in a mobile Facebook ad before converting, more than 32 per cent converted through the desktop site within 28 days. The social networking giant also reports an increase in the likelihood of people converting on other devices once they have shown this interest in mobile ads, which reinforces the importance of a cross-device strategy.

Additionally, in an effort to maximise online spend, campaigns are increasingly using personalisation techniques based on customer data. Francis says: “Throughout the path to purchase, you have the opportunity to personalise your conversation with your audience through ads across all the devices they use. Each exposure and interaction, correctly managed, can bring them one step closer to conversion.”

Microsoft will launch a new set of tools this autumn that allows brands to deliver creative work sequentially across all Microsoft platforms. This will apply where the brand has Microsoft ID, which identifies consumers using Microsoft’s suite of services including Windows, MSN, Skype, Outlook, Windows Phone, Xbox and Bing.

Owen Sagness, general manager at Microsoft Advertising, says unifying data from diverse digital platforms under a single user ID is fundamental to a personalised marketing strategy. He says: “There has been a lot of talk about the power and potential of brand story-telling, when it is done well. We believe a strong cross-device strategy supports powerful story-telling – [that is,] a brand message told well, creatively and seamlessly across devices.”

A lack of personalisation can diminish overall marketing effectiveness. Sagness says: “Consumers are losing patience with bad ad retargeting, often finding it irritating or intrusive. This is why we are challenging the industry to be more thoughtful in the way it delivers relevant advertising to consumers. Brand perception that drives consumer action is dependent on it.”

Kantar Media’s research also highlights the changing role of digital devices. Tablets are becoming a more personal tool, indicated by the increase in the number of tablets per household.

Trevor Vagg, director at Kantar Media Custom, says: “It’s moving from one tablet device in the house to people getting second and third personal devices, so brands could have more one-to-one conversations on this screen.”

However, personalisation is reliant on the quality of data, which is tracked in numerous ways and can therefore throw up challenges to those monitoring consumer behaviour across devices.

“TV is arguably the most difficult,” says Francis. “Advertisers often question how to measure the level of engagement with their television ads. That’s one of the great advantages of digital as it allows us to measure interaction, engagement and, ultimately, conversion much more easily.”

He highlights the use of people-based lift studies, where some groups are exposed to ads while others are not and both groups’ purchase behaviour is analysed.

Sally Pemble, digital acquisition manager at James Villa Holidays, says: “While cross-device marketing is something we do, our primary focus is still on desktop. The fact is that, for significant purchases such as a villa holiday, consumers may research on a mobile but they’ll make the purchase on a desktop.”

During the holiday company’s two-month search retargeting campaign, personalised banner ads featured specific villas and holidays that new visitors to the site had investigated previously through search engines. The brand doubled its typical click-through rate from digital display campaigns and increased its conversion rate by 60 per cent.

The choice of devices for personalised campaigns requires careful selection. IPG Media and YuMe conducted research on the impact of video advertising on various audience segments. They found millennials most distracted while watching video with 94 per cent frequently multitasking. The same group is also more likely to multitask using other connected devices.

James Shaw, head of retention for gambling site Betfred, says brands should experiment with personalisation techniques to determine which screen is best for a particular audience. He says Betfred’s priority is intelligent, segmented campaigns via mobile.

“We have creative elements and segmentation so we will send you relevant digital media and content based on what games you play. If you only play roulette and blackjack, we will try to send you the correct creative.

“We have variable content based on your favourite games. The visuals, words and transaction data are all mashed together intelligently to create a holistic customer experience and interaction.”

Working with mobile marketing company OtherLevels, Betfred analyses players’ response rates in other channels, such as email and SMS. The OtherLevels analytics platform and testing tools enable the brand to observe, catalogue and carefully experiment with messaging to discover what works. This provides greater understanding of player preferences and enables Betfred to create intelligent messaging and ad campaigns.

The gambling site is also investigating geo-targeted personalisation, moving beyond decisions about the best devices to use for digital campaigns towards linking retail and digital.

With 1,300 retail outlets in the UK, geo-targeting is “another big game-changer on the horizon” for Betfred, says Shaw. ”That’s where we can get really intelligent because we can drive customer behaviour offline and digitally.”

The use of customer data to create personalised campaigns across multiple digital devices presents a big challenge for brands. While some are at the stage of implementing a sophisticated cross-device strategy based on individual customer behaviour, many are still determining which screens work best for specific products or services.

Arti Shah, agency sales director at The Weather Channel (see Case Study), believes the type of device will become secondary to the execution of the campaign and says targeting the right people is most important.

Shah says: “We live in a world where there are tons of devices. It’s going to become blurred as to what devices are used, when and where, so it’s more important to set yourself up to get the right person at the right time, regardless of what device they are using.”

Nevertheless, advances in tracking across multiple devices will go a long way to assist brands in finding the right consumers at the right times.

97 per cent of consumers have a TV at home

82 per cent own a desktop and/or laptop PC

63 per cent own a smartphone

45 per cent own a tablet computer

41 per cent own a games console or handheld device

23 per cent own an e-book reader 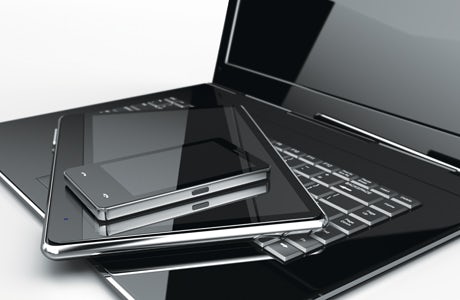 IAB’s RealView research shows that we are a nation of multi-screeners.

A camera was attached to the neck of 20 respondents for three days, capturing an image of their activity every five seconds.

One of the first things we noticed from the footage was that there was no such thing as downtime; the respondents were almost constantly looking at a digital device.

Crucially, this screen usage was rarely confined to one device. Frequently there was another screen present at the same time.

We think these two insights are linked and call this trend ‘omniscreening’.

This provides huge opportunities for brands to create personalised and contextually relevant communications via this myriad of screens – but often the question is ‘How?’

These mobile-first technology companies have found ways to track mobile users and are using these insights to deliver cross-screen information – an example of mobile expertise growing the entire digital industry.

The increasing omniscreening behaviour of consumers gives marketers more insight than ever to optimise both online and offline campaigns. Users have a tool in their pocket to provide live feedback to marketers at all times and we are only at the tip of the iceberg of the opportunities this offers.

The Weather Channel UK partnered Thomson, owned by TUI Travel, and adopted the unusual approach of associating a holiday brand with bad weather.

Shah believes the targeted nature of the campaign meant there was less wastage. “If we take a ‘one trigger fits all’ approach, that’s a lot of money going down the drain. This [campaign] was more intelligent about when and where to serve ads,” she says.

Using the channel’s weather-targeted advertising across multiple platforms, the campaign encouraged users to book a holiday by taking advantage of bad-weather conditions in the user’s location. The results of the campaign, which ran between February and June 2014, showed branded backgrounds achieving a click-through rate of 1.06 per cent. The industry average is 0.65 per cent.