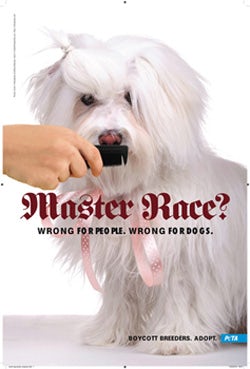 The ad shows a dog with the end of a black comb strategically placed across the upper lip in reference to Hitler. The caption reads: ‘Master Race? Wrong for People. Wrong for Dogs. Boycott Breeders. Adopt!’

The ad will go on a bus shelter in Birmingham’s Broad Street, the city where the annual dog show is held from later today (2 March).

The link between dog breeding and Hitler’s views was first made in a documentary on BBC1 back in 2008. ‘Pedigree Dogs Exposed’ led to the BBC taking the decision to stop broadcasting Crufts for the first time in 40 years. Pedigree pet food and the RSPCA also withdrew their support for the show.

Complaints were made to Ofcom that the documentary had been unfair. The regulator ruled that though the way the film was edited had been fair, the Kennel Club was “not given a proper opportunity to respond to an allegation about eugenics and a comparison with Hitler and the Nazi Party, or an allegation that it covered up the nature of an operation carried out on a Crufts Best in Show winner”.

The BBC, nonetheless, stood by its decision. In 2009 the show was broadcast live on the internet, while this year it will be shown on More 4.

PETA is no stranger to controversial ads – in the past six months it has had two banned by the Advertising Standards Authority. Last month the ASA banned an ad that featured a picture of Baby P killer Steven Barker for causing serious offence and distress.

Back in October, another campaign was stopped for spreading “undue fear and distress” about swine flu.

PETA has also recently ditched a campaign in the US which featured billboards bearing golfer Tiger Woods’ face with the slogan: “Too much sex can be a bad thing … for little tigers too. Help keep cats (and dogs) out of trouble: Always spay or neuter.”

Lawyers for Woods threatened to sue the activists if they used his image. Reports suggest PETA has now confirmed it would feature another well-known philanderer instead, South Carolina Governor Mark Sanford, with the possible tagline “Your dog doesn’t have to go to South America to get laid.”