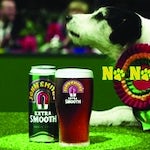 Comedian Peter Kay and his dog Tonto are seen winning a dog show in the latest incarnation of John Smith’s ’No Nonsense’ ad campaign.

Crufts Dog Show presenter Peter Purves adds authenticity to the ad by providing the voiceover for the ad, which was filmed at Wembley Arena.

Dog Show is the third in a series of ads from the latest John Smith’s campaign which features Kay reprising his role as the straight-talking character John Smith. Diner and Antiques were the previous two executions in the campaign for the Heineken UK-owned brand.

Behind the scenes ’making of’ footage from the ad can be viewed at the John Smith’s YouTube channel.

Heineken UK senior brand manager Gareth Turner says: “Dog Show gives a nod to Britain as a dog-loving nation in a down-to-earth way that is entirely in keeping with the virtues of the brand.

“The concept of Kay’s character taking great pride when his four-legged friend displays an important animal ’life skill’ – the collection and delivery of his daily newspaper – makes eminently watchable No Nonsense viewing.”