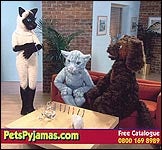 Pets Pyjamas, the provider of on- and offline pet supplies, is developing an interactive channel for its customers.

The service will be available on a range of platforms, including digital TV, the Internet and PDAs (personal digital assistants).

The channel is likely to be branded Pets Pyjamas and will offer services such as video-on-demand and TV pet shows.

A menu will also allow consumers to chat to each other and order products.

Pets Pyjamas has hired Brandsasbroadcasters, which describes itself as a “brandcasting” agency, to develop content and platforms for the venture. The company is talking to a number of interactive TV operators.

Charles Fallon, co-founder and chief executive of Premium Petcare, owner of Pets Pyjamas, says: “The Internet is still an exciting channel, but it won’t be long before the interactivity of broadband and digital will overtake it.

The company has a mail-order catalogue service alongside its online operation at www.pets-pyjamas.co.uk.