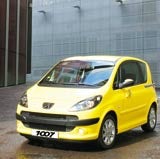 Five is to broadcast its first interactive sponsorship, for the launch of Peugeot’s new 1007 city car. The sponsorship will run around films on the channel.

In addition to the appearance of the red button in the sponsorship break-bumpers, a similar icon will be on screen during the first part of the film.

Using the red button on their handset controls, Sky Digital viewers will be able to click through to a dedicated site that gives details about the Peugeot 1007. They will be able to read about the car’s sliding doors, tiptronic steering wheel-mounted gearshift and changeable interior trim. They will also be able to order a brochure or test-drive.

The sponsorship idents, created by Euro RSCG, will show a man being chased by a pack of dogs. He is stopped in his tracks by a brick wall, which then slides open to let him through to safety.

Speaking at the Thinkbox Experience television advertising conference, media manager Melanie Kent said: “We have found that TV is the best medium to demonstrate the product features.”

Peugeot has been sponsoring films on Five for some time, giving the brand exposure around 250 peak-time films a year.

Kent adds: “We have 13 models to support. You can’t afford to put all of those on TV with advertising.” She says the sponsorship helps the car manufacturer to gain exposure for all its cars. It also gives the marketing team the chance to develop its own creative work for the UK market, in the form of sponsorship idents, rather than having to rely on advertising produced for an international market.