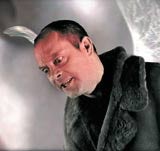 Pfizer is to launch the first major flavour extension to its market-leading Listerine mouthwash in its 120-year history, with a citrus range of products early next year.

The Natural Citrus Listerine line has already been successfully launched in the US, where it has been available since September 2003. The line is formulated with natural orange, lemon, grapefruit and tangerine oils, as well as the same active ingredients found in other variants of Listerine.

The company hopes that Citrus Listerine will appeal to consumers who do not like the strong taste of the traditional Listerine range. Industry sources say the new line has a mild and more pleasant taste, and is likely to appeal to women.

The range will be backed by a multi-million-pound launch campaign next March, created by roster agency J Walter Thompson. Media is handled by MindShare.

The last major innovation for the brand was a Listerine-flavoured breath-freshening strip, which was developed in partnership with Cadbury Trebor Bassett last year (MW December 5, 2002). Pfizer sells a Listerine-branded toothpaste in the US, although there are no plans to bring the product to the UK.