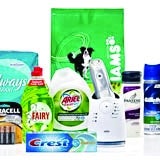 Procter & Gamble returned to the top of the league table of the UK’s biggest-spending advertisers, increasing its spend to £195m last year.

Overall, UK organisations spent £1.84bn on advertising in 2010 despite gloomy economic forecasts, according to the Nielsen Company.

Last year’s biggest-spending advertiser, The Central Office of Information (COI), featured in the top 10 despite halving its ad spend from last year and a freeze on “non-essential” Government advertising spending shortly after the coalition government came into power in May.

The top 10 biggest-spending advertisers sourced by The Nielsen Company are listed below: