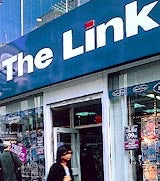 Garner replaces Ian Ditcham as marketing director, after the latter was drafted in to the Dixons chain earlier this year.

Garner leaves UK50plus, an Internet start-up aimed at the over-50s, where he was chief executive of trading brand Clickton.

He was at P&G for nine years, where he was marketing director of homecare in central and Eastern Europe and led the launch of Pantene.

Ditcham took over the chief marketing position at Dixons in February, after nearly a year as marketing director for The Link. He replaced Chris Langley, who had been promoted to managing director some months previously.

The Link, launched in 1994, now has over 200 stores nationwide. In 1997 a 40 per cent stake was sold to Telecom Securicor Cellular Radio, which is majority-owned by British Telecom.

M&C Saatchi holds the £100m account for The Link and the other brands within the Dixons Stores Group – Dixons, PC World and Currys.