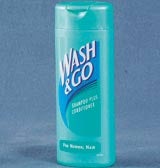 Procter &amp; Gamble is to relaunch the Wash &amp; Go range of shampoos in July in a move that is seen by the industry as a vote of confidence for the declining brand.

The haircare range will be repackaged and supported with a &£2m advertising campaign, the first major advertising committed to the brand since P&G separated the Vidal Sassoon name from Wash &amp; Go in 1998. The company also plans to extend the range with a new natural menthol variant, called Wash &amp; Go Fresh.

P&G axed several products from the Wash &amp; Go range in 2000, and many in the industry have since considered the brand to be on borrowed time. According to one source, sales of Wash &amp; Go have gradually been eaten away by larger P&G stablemates such as Pantene and Head &amp; Shoulders.

P&G’s acquisition of the Clairol range, including Herbal Essences shampoo, was believed to put further pressure on the brand (MW May 24, 2001).

An industry insider says: “The brand has struggled for years now and it would not have been a surprise to see it on the selling block. But clearly P&G sees life in the brand.”

A P&G spokeswoman says: “We are relaunching [Wash &amp; Go] and giving it a fresh new look to make it more relevant to our target market. This demonstrates our commitment to Wash &amp; Go, which has a key role to play in P&G’s portfolio.”

Rival Unilever is also tinkering with its haircare range. The company plans to relaunch its Timotei shampoo line this summer. This is the second time the brand has been revamped in as many years (MW November 15, 2001).

Fashion retailer French Connection is being forced to abandon its flavoured alcoholic beverage FCUK Spirit, because the FCUK brand appeals too strongly to youngsters aged under 18 years old. The Portman Group, the drink industry’s self-regulatory body, has upheld a complaint against the drink and has asked retailers not to stock the product. FCUK Spirit, […]

The Guardian is producing a 36-page A5 supplement in a tie-up with Nissan this Saturday (May 24). It is an A to Z guide to colourful phrases based on Nissan’s ‘Do You speak Micra?’ campaign…