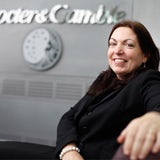 Speaking at the IAB Engage conference in London today (4 November), Donnelly, corporate marketing director and head of marketing for P&G in the UK and Ireland, says that the FMCG giant is committed to digital marketing where it directly involves and engages with consumers.

“You can no longer tell and sell. You really need to engage, connect and collaborate. You need to innovate with your consumers. The consumer is our boss,” she says.

She cited the recent Old Space campaign, which it is claimed generated a greater online response than Barack Obama’s victory speech, as an example of how powerful a truly interactive digital campaign can be.

Donnelly also admits she was “partially wrong” in her IAB Engage 2007 speech, when she claimed there was no difference between online consumers and an offline consumer.

“To deliver a business strategy and supercharge our brands, online will be absolutely at the heart,” Donnelly says.

Looking forward, Donnelly pointed to the Olympics as the next big event that P&G will focus consumer driven digital marketing on.

“It will be the most online Games there has ever been,” she adds.