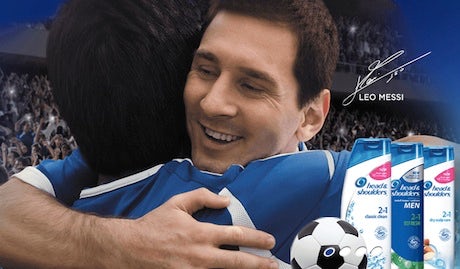 Speaking at the Barclays Back to School conference in the US yesterday (4 September), P&G chief financial officer Jon Moeller uses Head & Shoulders as an example, saying it will reduce the number of spokespeople for the brand by nearly 50 per cent. Rather than using different brand ambassadors in every country, it will focus on two global spokespeople in Sofia Vergara and Lionel Messi across 45 markets, raising questions over Joe Hart’s long-term association with the brand. A spokesman for P&G in the UK says it will continue to work with Hart “across the next year”.

“We’re simplifying the number of brand spokespeople that we use on a global basis. When we select the right spokesperson, the individuals who unquestionably represent the brand’s equity, they can be effective across many markets,” he adds.

P&G is also looking for other ways to cut down on marketing costs, including producing shorter TV ads with “higher impact”. Moeller says Head & Shoulders in the US recently produced two ads, one 15-second spot and one 30-second spot, using Vergara.

Consumer research conducted by P&G found that the 15-second spot was more effective with higher overall recall than the longer ad and the category average. It also cost less to air.

Moeller says this demonstrates how P&G can cut marketing spend while ensuring its campaigns remain effective. Despite reducing spend on Head & Shoulders by 50 per cent, the brand saw “mid single digit growth” last year, he claims.

“Our efforts to increase effectiveness and efficiency of our marketing investments of Head & Shoulders have significantly reduced costs while driving growth. Head & Shoulders is the number one shampoo brand in the world, roughly a $3 billion brand and grew mid single digits last year,” says Moeller.

P&G remains focused on shifting more of its media mix to digital mobile and social media, citing the success of its Always #likeagirl campaign, which it says achieved in excess of 4.4 billion impressions in more than 20 markets. That includes 75 million YouTube views, with Moeller claiming this reflects a “high return high-impact marketing execution at a lower cost”.

The move comes after P&G announced plans to axe up to 100 of its brands. Moeller says this will create a “faster growing, more profitable company”.