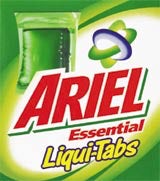 Procter &amp; Gamble is to relaunch the liquid versions of its detergent brands next year in an attempt to stimulate sales in the mature category.

P&G will ditch the existing range of pouches across its Ariel, Daz, Bold and Fairy brands for a new line of bottles. The brand formulas will also be tweaked, to offer improved washing performance.

The relaunch will be supported by an advertising campaign, worth about &£10m, created by roster agency Grey. It will include television ads and sampling campaigns. Media buying and planning is shared between MediaCom, Zenith Optimedia and Starcom MediaVest.

P&G plans to give away a rollerball dispenser with the bottle range for the first two months of its introduction. After that it will encourage consumers to order one through a hotline number.

Industry sources say the company is hoping to attract new customers to its liquid ranges, which have suffered because of the introduction of liquid pouches. The pouches have been criticised for being “messy to use”. P&G also plans to raise margins on its liquid ranges by increasing the price of the new bottle format.

One insider says: “P&G is showing it is serious about liquids. Its relaunch will have all the usual claims of giving the whitest whites and best-ever washes.”

UK marketing director Giuseppe Casareto, who was appointed last month (MW October 23), will head the liquids revamp. Fairy detergent is also to be given a new format – a liquid capsule range next year (MW October 16).

Complan, the nutritional drink, is planning to support its chocolate-covered nutritional bar, Complan Active, with a &£1m marketing campaign. The brand is owned by a joint venture between Heinz, the Complan management and investment vehicle SAATCHiNVEST.

Bartle Bogle Hegarty and J Walter Thompson are understood to be on the final shortlist for the £60m Birds Eye advertising business. It is not known if incumbent McCann-Erickson has been ruled out.