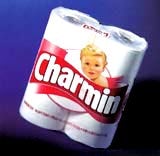 Procter &amp; Gamble is to launch a jumbo-sized toilet roll next year to appeal to housewives who are fed up with changing them constantly.

The 500-sheet roll, which is more than double the normal size, will be one of a number of toilet tissue products to be sold under the Charmin brand-name next year.

The Charmin range of toilet paper – a direct rival to Kimberly-Clark’s brand leader Andrex – will appear in shops from the end of January.

One source says: “P&G has done research that shows housewives change the loo roll two-thirds of the time, so it hopes this bigger roll, which won’t need changing so often, will appeal to them.”

The launch of Charmin will be backed by an estimated £20m promotional spend. Sources suggest £14m of this will be used in the first quarter of 2000.

Charmin is the number-one brand in the US, and represents P&G’s first assault on the UK toilet tissue market.

According to an insider, P&G aims to make Charmin the leading UK brand within three years.