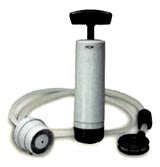 Procter &amp; Gamble is using its expertise in the laundry detergent sector to launch a powder that aims to make water safer to drink in third-world countries.

The owner of Ariel and Fairy brands has developed a powder which, when poured into water, “seizes and separates contaminants”. These later form a visible sediment.

The consumer can then pour this water through a filtering cloth for clean storage and dispensing.

P&G, which says that chlorine alone is not enough to disinfect drinking water, is waiting to patent its safe-drinking water system.

The household-goods giant says the system will be affordable even for low-income consumers.

A US spokesman for P&G says: “This initiative fits very well with our corporate strategies for competing effectively in the developing world, as well as enhancing sustainable development. Both are viable to our company for our long-term interests and growth.”

It is unclear how the company plans to market the product in developing nations.

In 1999, P&G acquired Recovery Engineering, which makes the PuR brand of home filter devices. The company says that its system for purifying water in the developing world is based on a combination of P&G’s expertise in water management and PuR technology.