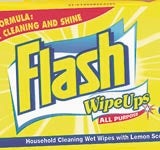 Procter &amp; Gamble (P&G) is to launch an orange-based cleaning range under its market-leading Flash brand in an attempt to control the nascent market for natural cleaning products.

Available from mid-August, Flash Orange will be introduced in wipes, sprays and liquids. P&G will support the launch with a &£5m advertising campaign, expected to break in September. Grey Worldwide handles advertising for the company, with media buying by ZenithOptimedia.

An industry source says that P&G is confident it will dominate the orange cleaner market. He adds: “I feel sorry for SC Johnson and Orange Glo, which created the category. Now P&G comes in with a copy-cat brand and masses of cash to drive out the smaller players again.”

This is not the first time that P&G has followed SC Johnson. Flash Express wet floor cleaner was launched at the beginning of 2002 to compete with the Mr Muscle version.