An updated media brief issued to media owners in the last few weeks introduced a remuneration model based on defined measures of engagement. P&G, which owns brands such as Gillette, Pampers and Pantene, will now pay publisher sites running its campaigns more money for engaged users – for example, those who go beyond viewing ads and sign up to newsletters, play games or watch videos.

The media brief has been issued to a number of publishers spoken to by new media age. P&G would not comment on the change in digital strategy.

The concept of engagement has become a hot topic in the last year as advertisers look beyond cost per impression (CPM) and click-through rate (CTR) as a way to measure the success of an online campaign. Although engagement is a key aspiration of online advertising, P&G’s move has divided the industry, with publishers realising they’ll have to work harder for a share of its ad spend.

One digital sales executive at a magazine publisher working with P&G welcomed the move but said it issues a challenge to publishers to ensure they’re delivering.

“You can either run from it or embrace it and raise your game,” he said. “Smaller publishers have to be creative with it. It means we can’t afford to be woolly and fluffy when creating content. But it allows publishers to be more flexible with campaigns. We can go to editors and get them to rewrite the content if it’s not working. We can see what’s performing and change the game or content if it’s not working as well as it could. The content has to demonstrate commercial activity.”

A digital director at another magazine publisher said P&G could struggle to get publishers on board.

“There needs to be attention to engagement but click-through is still important,” she said. “Most publishers won’t be willing to adopt the model as they struggle to engage users.”

Nick Reid, outgoing head of UK sales at MySpace, questioned P&G’s move. “How do you qualify cost per engagement [CPE]?,” he asked. “The market already struggles to identify the effect of digital on a brand.”

Bill Murray, a consultant at the Association of Online Publishers (AOP), said, “P&G is tearing up the rulebook and creating a new set of measures, saying it will define what qualifies as successful.”

Jack Wallington, programmes manager at the Internet Advertising Bureau (IAB), said, “It’s not the way the whole market is heading, but looking at more than traffic is a good thing. But even with CPE and other statistics, people are missing a trick in terms of branding power. Even if users don’t click through they could still be engaged. I hope P&G takes that into consideration.”

The move to a cost-per-engagement model has also seen a mixed reaction from media agencies.

Jerry Lloyd-Williams, digital strategy director at media agency Mediacom, said, “It offers great accountability and makes the media buy a more collaborative experience as it becomes a more tightly knit unit. It will soon become more of a trend and is something we always recommend to our clients.”

Mediacom worked with Volkswagen and Times Online last year to create a CPE campaign, A Life More Streamlined, for the Volkswagen Passat. The agency paid Times Online each time a person watched video, listened to a podcast or downloaded material.

“Digital is less about advertising and more about engagement. An engaged user is of more value and quality,” said Lloyd-Williams.

“I don’t necessarily agree with it as FMCGs don’t have a clear idea about digital, but they are data driven companies. The point is how can you measure the real effect of someone engaging? It’s impossible. I don’t think a category buyer at a supermarket would give a hoot. The key is reach and frequency.”

Procter & Gamble spent £2.2m on online advertising for the year to July 2009, according to The Nielsen Company. It’s the UK’s second biggest advertiser, behind the COI, with £176.2m spent in total during the first ten months of 2008. 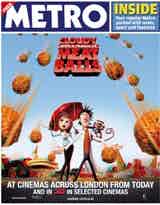 The protracted stand-off between Royal Mail and its employees over jobs, pay and services and the associated strikes has severely dented the postal service’s brand reputation.