The medium of television is changing. Never before have there been so many ways to watch TV, from digital recorders, catch-up services and mobile devices. Almost half of Sky’s 9 million subscribers take the Sky Plus service, and rivals including Freeview, Freesat, Virgin Media and BT Vision all now offer digital recorders and/or catch-up services.

Meanwhile, the BBC iPlayer on-demand catch-up service goes from strength to strength, available via the internet, cable and on mobile devices, and other broadcasters are looking to get their content available across an expanding range of platforms. It offers unparalleled choice for the consumer, who can increasingly choose what, when and where to watch TV.

But therein lies the problem for broadcasters and marketers alike. As new digital technologies are introduced into households, how will they affect media consumption in the home; will linear viewing decline and if so, by how much; is there an advertising model that serves them all, and if so is it as good as today’s? Sales house Viacom Brand Solutions, whose revenues are still 90% driven by linear viewing, wanted to investigate current and future digital trends in the home. With the help of digital specialist Decipher, VBS has just completed a multi-phased nine-month research study, Digital Drive.

VBS and Decipher recruited 15 ordinary households from London, Manchester and Birmingham and upgraded them to the most advanced digital media infrastructure available to them. The families were given a Microsoft media centre – a PC that behaves much like a television but networks homes with the use of a router and additionally an Xbox which acted as a second room extender. They were also given something called a Zune – which is a Microsoft mobile media device allowing them to take audio visual content on the move.

Essentially, the study attempted to fast-forward two years in order to capture a holistic view of digital media use in 21st century homes; identify changing patterns of consumption prompted by digital media adoption; assess implications for the nature of content delivered in a cross-media environment; and, crucially, evaluate evolving advertising opportunities on new and emerging platforms.

What was unique about the research methodology was the method of data capture, the transparency it offered and how it allowed media agencies to get involved with the project. Essentially, Digital Drive was a “public” study, accessed through www.digitaldrive.tv, allowing specific questions to be asked “live” at any time during the study, with comments posted back by respondents via a blog mechanism.

It also involved advertisers. Ten brands participated by submitting ad copy in varying advertising formats to discern what worked well and what did not.

Initially, our families were monitored for unprompted shifts in behaviour and then subsequently prompted to experiment with new live and concept-based examples of both content and advertising.

What the research revealed was an increase in consumption of audio-visual content driven by the number of devices available. Although there was a 15% drop in linear viewing, overall viewing rose by 32%. Secondly, despite the drop-off in linear viewing, viewing of TV channels remained the core source of content consumed and the TV in the corner of the lounge the key location. Linear viewing share hovered at the 57% mark with PVR viewing at 23%, on-demand programming at 12% and viewing via the mobile Zune device at 8% (chart 1). Live linear TV still has cachet.

Panellists liked the PVR, on-demand services on Sky, iPlayer, 4OD and increasingly as the study went on, the Zune for catch-up purposes (chart 2). But PC-based services such as Joost and Babelgum barely got a mention, proving that the quality of content plays a key role in people’s viewing habits.

Computers and second sets were set up in alternative locations, but the lounge remained the prime location for viewing, being consistently the main or only source of TV viewing for over 75% of respondents (chart 3). Finally, in this new environment, viewers showed a greater acceptance of content becoming more commercialised with advertising at the forefront. Almost all, 96%, preferred to see advertising and receive content free rather than no ads and have to pay for it.

Ten advertising concepts were presented to panellists and they responded pretty positively. Panellists were receptive to the idea that they could engage with an ad, respond to it and find out more about the brand instantly. They expected the ad to be targeted at them specifically. But there was a trade-off – they also had a higher level of expectation for the quality of communication.

Through Digital Drive, we have identified 32% more viewing and a definite viewing hierarchy emerging. There’s no doubt that linear live viewing of TV content in the corner of the living room, on the largest possible highest quality screen, with other people around, is still at the top of this hierarchy, beneath which sit time-shifted and place-shifted viewing.

It points to several ways that broadcasters and advertisers can embrace the new and emerging viewing formats. TV can grow in influence in and out of the home using these new viewing formats. But none of this yet compromises the role of linear live viewing – if anything it enshrines it. 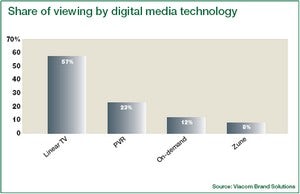 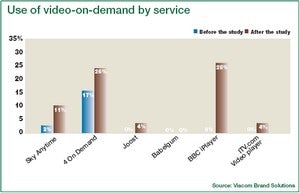 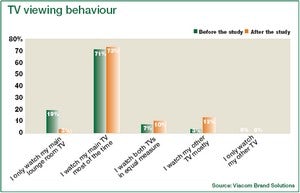