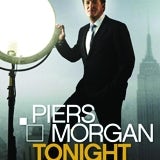 An outdoor digital billboard campaign carrying guest information will run on the London Underground and at departure gates at London City Airport.

A week’s space is also booked on the M4 corridor’s JCDecaux Torch to target Heathrow passengers.

The digital displays will be supported by Google and Facebook activity, designed to encourage engagement with the guests appearing on each programme.

George Clooney, Ricky Gervais and Oprah Winfrey have been confirmed as the first guests on the chat show which launches at 8pm on 18 January.

CNN International’s marketing director Mark Haviland says: “What will be really interesting to see is how this plays out in social media.

“The very distinctive interview style that Piers has and his ability to spark controversy and debate will, we think, be perfectly suited to that digital discussion.”