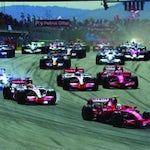 Todt had suggested that the contract should be put out to tender and Michelin was expected to submit a bid, however the tender never materialised and Pirelli, which was backed by Ecclestone and the Formula 1 teams association FOTA, has secured the multi-million poind deal.

The move came despite Todt’s reluctance and opposition to FOTA’s influence over the deal. “[The teams’ organisation] may suggest that it decides, but the strong man is not he who speaks the loudest,” Todt said earlier this month.

.It is the first time Pirelli has been involved in the sport since 1991, however the manufacturer has a long history of association with F1, dating back to the 1950’s and was famous for its exotic calendars, which formed part of its marketing activity.

Pirelli says its association with F1 will be a “vital calling card” for the brand and is planning to make important investments in corporate communications in order to make the most of the technology that go hand in hand with supplying F1.

The campaign will principally help to support Pirelli’s increasing profile in the emerging Latin America, Middle East and Asia Pacific markets, which are all areas now visited by F1.

The company is set to annouce details of how it plans to leverage the deal at the European Grand Prix in Valencia this weekend.