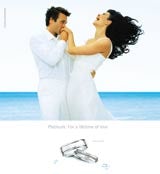 Platinum Guild International (PGI), an organisation funded by the world’s biggest platinum mining companies, is in talks with advertising agencies about a multi- million pound global campaign to stimulate demand for platinum jewellery.

PGI chief executive officer James Courage says the guild is in talks with a number of large agencies that could carry out a campaign across a number of markets. The pitch is being run by Agency Assessments International. PGI has no roster agencies.

The campaign will run across America – one of the precious metal’s primary markets – and Europe. Ads will appear in style and fashion press, such as Elle and Vogue, and bridal magazines.

The move follows a rebrand of PGI and its jewellery in September 2003. Interbrand carried out the brand review and the strapline “Pure. Rare. Eternal” resulted. PGI supplies information to jewellery makers and focuses on developing the demand for platinum.

Last year the World Gold Council, another industry-sponsored body, unveiled a &£10m global campaign. The “Speak gold” press and poster activity was an attempt to boost jewellery’s share of the luxury goods sector. The Bartle Bogle Hegarty ads featured real people in real situations and carried the strapline “One language everyone understands”.