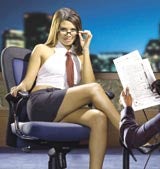 Playboy TV, the international adult entertainment company, is seeking an advertising agency to work on brand development in the UK.

The company has worked with Gasoline for the past year and the agency has been invited to pitch for the business. A shortlist is being drawn up with the assistance of the AAR.

Playboy director of marketing and sales Richard Gale says: “We are entering a new phase in the modernisation of the brand and products and are using the opportunity to ensure that we have the best agency partners.”

Playboy TV UK offers a number of premium channels including Playboy TV, The Adult Channel, Spice Extreme and Climax 3 on cable and satellite. It has just launched a Playboy TV video-on-demand service with NTL.

Earlier this month Ofcom fined Playboy TV &£25,000 for broadcasting scenes from an R18 movie, a rating given to the most explicit of sexual content. The regulator claims it was the first time that R18 content has been shown on British television and reprimanded the broadcaster for failing to train its staff to comply with the UK’s television code. Playboy conceded that last May after midnight it had on one occasion broadcast graphic sex of the type only sold in X-rated cinemas or sex shops.