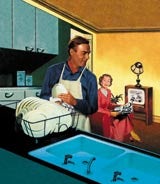 Marketers used to be criticised for stereotyping women as sex objects, housewives and mothers. These days, men are just as likely to be presented in stereotyped roles. From the irresponsible “ale lout” played by comedian Peter Kay in the John Smith’s campaign to the pratfalls of cute but incapable James Nesbitt in ads for Yellow Pages, men have become the butt of advertisers’ jokes.

There are men dressing up in drag for Flash floor cleaner ads and in-store promotions for Domestos Pink Power, or being depicted as incompetent buffoons in the kitchen for Old El Paso Mexican food. Alternatively, beauty products aimed at men use the chisel-chinned masculinity of Gillette’s advertising and David Beckham’s Adonis fixation.

But this week, the male portrayal has taken a new turn. For the first time in its history, nappy brand Pampers has created a UK television advertisement depicting a man as the main carer of a baby (MW last week). A small step perhaps, but brand owner Procter &amp; Gamble thinks this is a radical departure in the world of nappy advertising.

It comes as marketers are increasingly attempting to cash in on the belief that men are getting in touch with their feminine side. L’Oréal is about to launch a range of skincare products (MW July 22), Head &amp; Shoulders shampoo has launched a “for men” version and the media are heralding the birth of a new kind of “metrosexual” man.

Decades after the “sexual revolution” and nearly 30 years after the 1975 Sex Discrimination Act, brand owners seem to be finally catching up with the fact that women are out to work and men have started to take a slightly increased role in childcare.

P&G says the Pampers ad is keeping abreast of social changes and reflects how families live today. P&G associate director for paper Jenny Ashmore says the ad, which shows a man reading a child a bedtime story, reflects a big shift in men’s contribution to childcare over the past couple of years. “Everything we do is driven by understanding what is going on in family life. Dads now have a key role and mums find this ad very engaging. Mums who have seen the ad say that it resonates; they say that it reflects how men’s childcare actually works,” she says.

But some people think the industry is still mired in an old-fashioned mentality of gender stereotypes. Euro RSCG London executive creative director Nick Hastings says: “This campaign makes me think that advertising has been unbelievably slow to pick up on something that’s been a reality for 30 years. That reflects the conservatism of the industry and clients which are unwilling to change what they do.”

The Pampers ad is not urging men to rush out and buy the newly formulated Baby-Dry product, according to P&G’s Ashmore. It is attempting to appeal to women, who still make the decision on which nappy to buy, and the ad plays on their enjoyment in seeing men in a caring role.

Who wears the trousers?

Research suggests that men may not in fact be playing their part in the household chores and childcare, but for marketers the point is that women are still the primary shoppers and family carers. It is they who decide which products to buy, so it is important not to appear to be patronising them.

While some in the advertising industry blame clients for being averse to making risky statements about gender roles, TBWA/London joint managing director Jonathan Mildenhall thinks it is the fault of advertising executives. “The industry views clients as more conservative than they really are. We are caught up in our own stereotypes about marketing people,” he says. He thinks brands are more willing than they are given credit for to experiment with gender roles in advertising, but that ad agencies assume they are reactionary.

Maybe marketing hasn’t moved on that far from the old stereotypes of the Fifties, but then again, perhaps popular attitudes to gender roles are still fairly neanderthal. As William Nelson, a researcher at Future Foundation, says: “A lot of the stuff about changing male gender roles is overplayed. There is still a commitment to the male’s role being that of a provider and it is as strong as it ever has been. Reality strikes as soon as couples have children.”

But there have been changes in shopping habits driven by increasing household income, he says. For instance, the bathroom may have different shampoos for the man, woman and child rather than having a shampoo for the whole family, as used to be the case.

And there is a new androgyny in home décor, as men move “in from the shed and down from the attic” and help to make decisions on colour schemes. This may explain the decline of floral patterns which have traditionally appealed to women, claims Nelson.

Even if gender roles are still fairly traditional, it is no longer widely acceptable for advertisers to manipulate women’s perceived guilt about being poor mothers or housekeepers to sell products. Ads today tend to show men as bungling incompetents when they undertake traditional female tasks from cooking to childcare. This flatters women, confirms their role as keeper of the household and perhaps reflects what they really think about men.

In the late Eighties, advertisers started presenting women in newly empowered roles, particularly in car ads where models were being targeted specifically at women. Lucy Jameson, planning director at DDB London, believes most advertising today is noncommittal on gender: “After that period in the Eighties there was a phase in the late Nineties when you didn’t have to make a point either way about whether the ad was aimed at men or women, such as the Marmite ads. You don’t have to be male or female to love it or hate it. That is where most advertising is now, though there are a few sectors that have been left behind.”

She finds Gillette “really old-fashioned” for having razors aimed at men and the separate “Venus” range for women. “The ads that are most successful are the ones that ignore gender,” she says. “If ads are seen to be targeting women, women find that rather annoying and quite laughable.”

As advertisers wrestle with new, less irritating ways of appealing to women, there are increasing efforts to mine a new seam by turning the marketing of beauty enhancement towards men. Last month, Marketing Week revealed that L’Oréal is preparing to launch a men’s skincare range with moisturisers, balms and facial scrubs. This will challenge Nivea for Men, and comes in advance of the launch of the Gillette Complete men’s skincare range. Head &amp; Shoulders has launched a variant specifically targeting men, who have always been important customers for the brand. 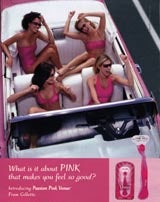 Some researchers think the male grooming sector is driven by aspirations that soon fade. A lot of men are aping David Beckham and his shopping and fashion habits. Behind Beckham is the imposing presence of his wife Victoria, but it seems many chaps do not have such a driving force. Siamack Salari, an ethno-graphic researcher at Everyday Lives, which films consumers’ daily habits in their homes and has observed hundreds of households over the past decade, thinks male grooming is only skin deep.

He says: “There is a huge influence from the Beckhams of this world and you see men putting moisturisers on their faces, but they rarely continue using them. The intention is there, but it grinds to a halt and they go back to their old habits. They use a beauty product for two or three days, but their routines are deeply entrenched. You look around their bathrooms and see half-used products.”

Salari believes men are looking for instant gratification from products, which beauty treatments rarely offer. Women, on the other hand, are willing to wait longer for results. But, he believes, some manufacturers have been slow to spot emerging trends and to respond to them, as P&G has been with Pampers. “Compared to 20 or 30 years ago, men are changing nappies more and it is about time they identified with that. But it is not a massive trend at the moment nor has it suddenly happened. It’s something very gradual,” he says.

An area in which traditional roles are changing is technology; women are now taking a greater role in deciding which products to buy. BSkyB’s personal video recorder service Sky Plus is said to have opened up a new market for women. Previously, women living in mixed couples were seen as a “hand brake” on men subscribing to Sky Digital because they thought it would mean them watching non-stop football and sport. But with the PVR, women know they can record their favourite programmes even while the football is on, and perhaps have an evening watching six episodes of Sex in The City back to back.

Gender roles are changing in different ways across product sectors. Traditional approaches are still very much alive, notwithstanding the rise of single-parent families and the pink pound. But these alternatives to traditional families are still relatively marginal to the mass market, which big brands seek to dominate. The fact P&G can view putting a man in a nappy ad as radical shows just how little perceptions in marketing – and perhaps social attitudes – have changed.

Some 81 per cent of British women still spend ‘a lot’ or ‘a fair amount’ of time cleaning the home compared to just 52 per cent of men, according to research by Mintel in 2003.

‘The skew to women shows that – despite the emergence of the new man – cleaning remains largely the domain of the housewife,’ says Mintel spokeswoman Amanda Lintott.

46 per cent of people in the labour market are women

Modern apprentices in hairdressing and in early years care and education are mainly women, while those in construction, engineering and plumbing are mainly men.

Women are the majority in administrative and secretarial (80 per cent) and personal service jobs (84 per cent) while men hold most skilled trades (92 per cent) and process, plant and machine operative jobs (85 per cent).

Only 18 per cent of MPs are women.