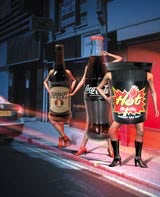 Advertisers are increasingly turning to sex to sell products, and some are gratuitously adopting “sexual” positioning for brands, which may – as some of the industry’s leading practitioners have warned – end up alienating the very people they are meant to appeal to: consumers.

Perfume houses and lingerie brands have long used sex in their advertising campaigns, and few people would consider this to be out of place. But when purveyors of cheese, soft drinks, ale and junk food start using sexual imagery in their marketing, some wonder whether this is exploiting sex in an unacceptable way.

If the public see no connection between the product and the advertising, they will suspect the motives of the brand owners. In an increasingly cluttered environment, with a proliferation of products in most markets, sex is still an obvious to get noticed, especially if a campaign is banned, altered or rescheduled by regulators the Advertising Standards Authority (ASA) and the Independent Television Commission (ITC).

The extent to which sex is seen as an easy way of declaring a brand to be in touch with consumers’ sensual desires can be gleaned from the latest brand to jump on the sex bandwagon, Coca-Cola – previously famed for its wholesome, clean-cut ads. In a major turnaround from its ads of the past, Coke is plastering steamy images of naked women on poster sites around the country.

One execution of the poster campaign, which was created by McCann-Erickson and broke last week, shows a naked woman with her curves replicating the contours of a glass Coke bottle. The strapline, “Get your hands on a contour,” seems to be an invitation to grasp the woman’s body, or a rather a bottle of Coke. In another execution, a man’s firm “six-pack” stomach is shown to resemble the ribbing on a Coke bottle.

Coca-Cola marketing director for Great Britain and Ireland Charlotte Oades says: “The campaign celebrates the unique shape and sensual form of the Coca-Cola contour bottle. We wanted to inspire thirst and bring to life the authentic and timeless appeal of the glass contour bottle, which is the ultimate way to enjoy Coca-Cola.”

This is not the first time that Coke has used a sex theme in its advertising. The Diet Coke Break campaign from the late-Nineties showed female office workers crowding round a window to watch a “hunk” stripping to his torso. But while that ad had a Bridget Jones-like innocence about it, the new campaign attempts to associate Coke with an exotic sensual and sexual experience.

Some agency insiders have derided the campaign as “lazy” and “inappropriate”, and see it as a sign of desperation by the world’s largest soft drink brand. One leading advertising executive, who prefers not to be named, says: “It is not very Coke, which has always been about a healthy attitude towards life. But there has always been a dichotomy there, between the freshly-scrubbed American way and British teenagers looking for something darker and more iconoclastic.”

Another advertising insider says: “More brands are thinking a bit of sexiness doesn’t hurt. It is creeping in more and more, because the content around the advertising is becoming more salacious – people stripping off on Big Brother and some of the programmes on Channel 5. A lot of agencies think ads should mimic the programme content.”

But he believes that using sex is often a “lazy” way of attempting to give a brand either appeal or shock value, and consumers will be sceptical if it appears to be without justification. “Jumping on the bandwagon is just lazy. People see through it,” he says.

The spread of sexual advertising through the Nineties has forced ice cream brand HÃ¤agen-Dazs, which considers itself a prime mover behind the use of sex as a metaphor for sensual indulgence, to change its strategy. It launched its “pleasures” campaign some ten years ago, but has now moved away from sex. This is because HÃ¤agen-Dazs believes sex has become cheapened by inappropriate use.

HÃ¤agen-Dazs senior brand manager Reemah Sakaan says: “Sex has always been a great analogy for expressing intense sensual pleasure. We picked up that it was becoming the format for anything from cheese to coffee and was being used to sell pretty much anything”. She does not think there has been an “explosion” of sexual ads, but adds: “Sex is a very motivating and spot on analogy, but it can get abused and bolted on, it is about using it with integrity.”

Sex has been used in advertising for many years, and the Flake ads have always had a slightly sexual air about them, though this was made absolutely explicit with the recent execution for Snowflake.

One critic of the campaign is advertising veteran Winston Fletcher, who has been in charge of many agencies in his time in the business. “The Pot Noodle campaign targets the youth market, but my guess is that it will harm the brand and Pot Noodle will live to regret it,” he says.

Nevertheless, Fletcher believes there is not as much sex used in contemporary advertising as one might suppose. Out of about 12,000 ads produced each year, only a handful use sexual images, he says. In fact, he believes there should be more sex in ads. He adds: “The sex in advertising is tame and full of innuendo compared with the sex in books, TV and magazines – it could be argued that far from pushing sex, advertising is far too reticent and does not reflect society’s much more open attitude.”

Tanya Livesey, HHCL account director for Pot Noodle, believes the campaign will be “incredibly” effective. “This is because it talks about the product in a highly relevant way. In a society obsessed with healthy eating, Pot noodle is a quick and grubby snack that people love because they think they shouldn’t.

“The analogy drawn in the advertising to illicit sex is a perfect expression of this observation about the relationship consumers have with the brand,” she says. Livesey claims the ad was shown to mothers before the campaign broke, who thought the word “slag” was no worse than the language that would be heard on programmes such as EastEnders. “It’s a tongue-in-cheek campaign that even mothers feel should be taken in the spirit with which it was intended,” she says.

But Livesey also believes that consumers will make judgements about brands that use gratuitous images and campaigns. She adds: “Consumers will see straight through irrelevant stunts and will not respect you for it. However, they do respect brands for being brave if they have something relevant to say.”

The campaign that is most roundly criticised for striking an unlikely and gratuitous association with sex is Seriously Strong Cheddar’s “Safe sex, dangerous cheese” ads. The campaign has now been dropped, but marketing manager Glyn Price at brand owner A McLelland stands by it. “The idea was to raise the profile of the brand and give the idea that cheese is a sexy product. Seriously Strong Cheddar is a stronger tasting cheese and we were trying to say it is the kind of thing people get attracted to,” he says.

The campaign has not done the brand any harm: sales have trebled since 1995 and the company has changed from being a trader in other people’s cheese to a producer in its own right.

A bizarre brand transformation has taken place with another of McCann-Erickson’s clients – Greene King’s Abbot Ale. After a long-running campaign based on a Mediaeval abbot character, the brand suddenly reduced the prominence of this icon earlier this year, and embarked on a campaign unashamedly playing on sexual innuendo. The ad features a woman writhing on a bed with the strapline: “Some things get better given longer”. This refers to the extended brewing process used for the ale, which is a long-standing selling point. The ad was banned by The Mail on Sunday, and there were a number of complaints to the ASA, though these were rejected.

Greene King marketing director Sue Thomas-Taylor says: “Consumers told us the Mediaeval abbot thing was irrelevant to them, they didn’t understand it. We needed to broaden the appeal of the brand and bring it up to date, and we have given it a cleaner, fresher approach.”

She denies that the campaign with the woman in bed was developed to try and get press coverage, but she adds: “I can’t deny there has been quite a lot of press coverage that we might not have had if we hadn’t had such an interesting ad.”

Another beer that has gone the sex route is Kronenbourg in its “Vive la vie FranÃ§aise” poster campaign, created by newly appointed M&C Saatchi. In one poster execution, an undressed young woman reclines on a sofa, but her modesty is preserved by the line: “If Britain were French… this poster would not be censored.” Brand owner Scottish Courage says the poster is “tame by many standards,” though there have been complaints to the ASA. The body has yet to rule on these.

In these days of Sex and the City and the Playboy Channel, it seems probable that more brands will try to use sex to sell themselves. This will inevitably lead to too much clumsy advertising, which will play the game of getting banned by the ASA. But brands could kill the Golden Goose, since if too many ads use sex, it will become a debased commodity and no longer serve the purpose either of shocking or conveying indulgent sensuality. Most of the marketers contacted for this article agree that sex sells. But some wonder for how much longer.